The first thing house hunters seem to fall in love with here in Merida are the glorious and elegant restored colonials... the ones with the high-ceilinged rooms that open onto shaded pasillos, with graceful arches looking out onto green tropical gardens. These homes are furnished sumptuously, with Old World antiques and Venetian glass chandeliers. If you've been here, you know what we're talking about. We always feel so privileged when we get to walk around in these old homes that have been refurbished to their original glory... we feel like time travelers, adventurers, historical figures. We love the history that oozes from every wall and fixture.

After living here awhile, we found our affections stolen away by a completely different kind of house. This kind of house wasn't elegant or shiny. There were no highly-polished floors or glass chandeliers. The first house we saw like this was a colonial that had been restored (working bathrooms and a kitchen,electricity, telephone, etc... ) but as much was left out as was put in. The finishes were matte, the furniture was often second-hand or custom-made, the mirrors were slightly cloudy and unframed and the light fixtures had been rescued from junkyards. The floors were cement with some tile inlaid, or as in this house, the original tile floors had been left practically untouched. The overarching experience was almost modern, with a preponderance of wood, stone and iron with touches of faded color. In another part of the world and in another time, this style might be called 'shabby chic', but because we're in Merida, this style has its own character. We call it colonial chic and we love it for the way it blurs the experience of old and new.

The house in Episode Three has strong elements of colonial chic, with a definite New York tone and an obvioius appreciation for the laid-back tranquilidad and the rich heritage of Merida and the Yucatan.

What the video doesn't show is something that the owners fell in love with right away... the very large lot. The house is about 2500 square feet and sits on a lot that is 40 meters by 70 meters in the back. The first thing you will notice in the video as Eric walks through the front door is that the doors are either original or built to look that way. Stripped and sealed, the bare wood (probably cedro) brings warmth to the white-washed walls. Gone are the arches and the columns with their golden capitals. The owner told us, "Our renovation basically stripped out unecessary walls, ugly columns etc. and added glass walls and a sense of openness that had been buried." During the one-year renovation, all artifice was stripped away to reveal the bare bones of this colonial stalwart, now confident in its nakedness and proud of its high-cheekboned stone walls, its tall ceilings and its tiled floors.

The front room of the house showcases the attitude of the owner, who is a production designer in New York. Obviously the owners appreciate those mosaico tile floors, because they didn't change them or add any polished cement. They left the original ceiling beams but updated the look by painting it all white and adding new lighting. The walls seem to be mostly original, or if they were added, they wisely copied the traditional beveled doorways.

OK, the kitchen maybe isn't so shabby, or colonial... but it sure is chic! Those highly polished concrete counters are beautiful. Note the open shelves. It is traditional NOT to hide the dishes, glasses, pantry items or anything else behind closed doors in a kitchen. That keeps the air flowing, and gives bugs fewer places to hide. No expense was spared for appliances here, but the actual work in the kitchen probably wasn't prohibitively expensive.

Even though we love those pie-chart windows, the floor-to-ceiling glass doors in the living room are a great touch, don't you think? They open the living room up to a patio flanked by the stripped mamposteria (stone and cement) walls of the house, punctuated by three more of those gorgeous wooden doors. We love the outdoor living space by the garden and the pool, presided over by old orange trees dressed up with Christmas balls. And the subtle shell inlay on the old stone wall is another beautiful touch...a subtle chic touch added to a colonial tradition.

The large back lot has been cleaned up with a lovely lawn as backdrop to the mature fruit trees, and a big swimming pool. When they bought the house, the owners found that the backyard had a large 15-foot deep cisterna... basically a big empty pit. They used part of the pit to create the swimming pool (avoiding the cost of digging) and used the rest of it as a place to put escombro (construction detritus), avoiding the cost of hauling it away.

We asked the owner questions about the house, and at the end, if there was anything else she would like to share. This is what she said: "What I would say in general is how amazed I was that the house was completed basically on time and on budget and we only went a couple of times during the renovation. The workers moved in and just did it. Unbelievable for any American who has dealt with contractors. Unheard of! I think the gentleness of the place and the essential honesty of the people are remarkable. Not to mention the beauty."

Combining "old" and "new" is a municipal past time in Merida, and we love the way this 2-bedroom Santiago house came out. Take a look at the photos in this article to see how the house looked originally, then go to the video to see how it was transformed when the renovation was done. 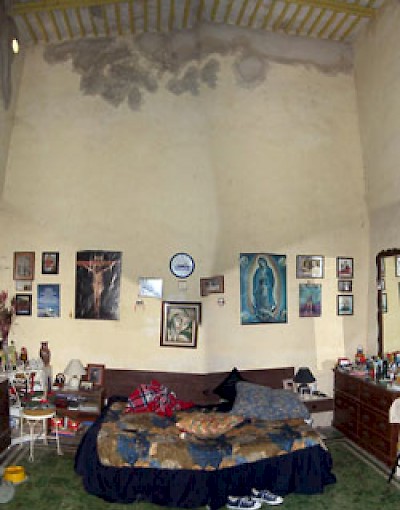 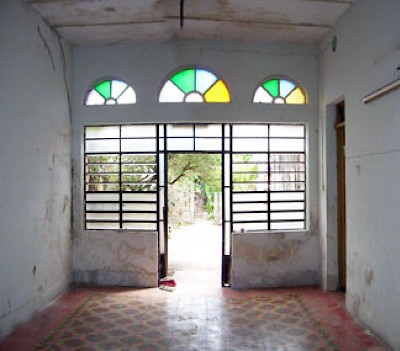 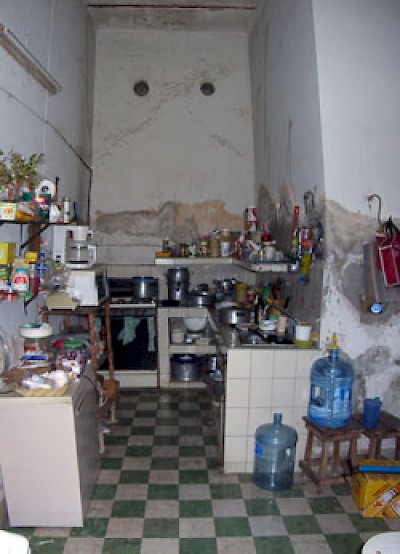 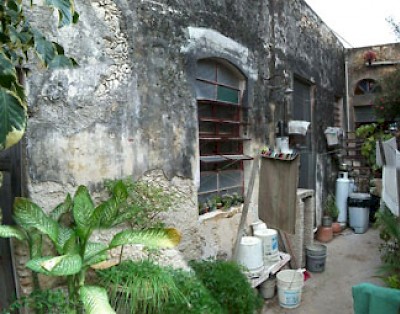 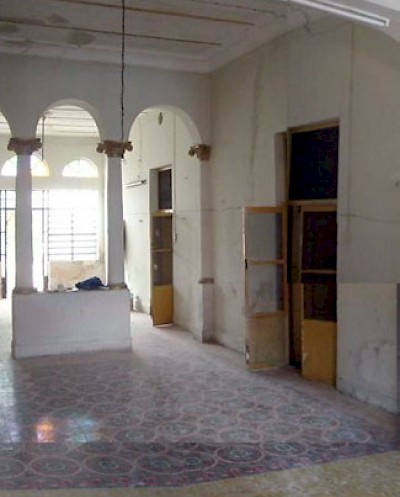