REAL ESTATE / Be It Ever So Humble... Email & Share

We've had many requests to show you what lies behind some of the less magnificent facades of Merida. We all know there are some pretty spectacular houses with sweeping vistas, tall ceilings, columns, arcades, reflecting pools and more here in this colonial city. But many of us can't afford that kind of home. And some of us don't even WANT that kind of home (after all, those big houses can be a lot of work to maintain and keep clean).

Episode Five of The Houses of Merida brings us to the humble abode of a single woman who moved here from the cold and grey city of Seattle. While she loved (and still loves) Seattle, one of the reasons she came to Merida was to live in sunshine and to enjoy the colorful life of the Yucatan. She is retired, and travels to visit family or friends regularly, so she also wanted a home she could lock up and leave for weeks at a time. And being on a fixed income, she wanted a home that wouldn't break the bank when it came to utility bills and upkeep.

The house opens onto a busy street, but has one of the owner's requirements, a garage. It is a two-story house, with two of the three bedrooms upstairs to take advantage of the prevailing breezes. There's also a private deck upstairs, which now boasts a shaded roof since we video taped there (see the upper left corner of the facade photo below), and the owner tells us that the space is much more enjoyable that way and she uses it a lot more now. The room in the back that was originally a neglected laundry room has been turned into a lovely guest cottage with its own kitchenette. And between the guest cottage and the house is a small garden and a plunge pool, both easy to care for.

As you will see, the furnishings and design of the home are simple... nothing fancy here. On the other hand, there is plenty of color, a definite statement made by someone who was used to the cold, grey weather of the Northwest. The owner was her own contractor, and besides getting the house done exactly the way she wanted it with minimum fuss, she enjoyed the experience of working with and getting to know the albañiles, some of whom have become friends.

The overall effect is a simple house that is easy to live in, big enough for parties and gatherings and with enough rooms and space to accommodate multiple guests. This house is bigger than it seems, and can accommodate up to six guests, in addition to the owner.

When she bought the home, the basic structure was what attracted her. The house had everything she had put on her list that she wanted. Like many of us, however, she knew nothing about the neighborhood that she moved into. This house is in the Centennario neighborhood, named after the Parque Centennario Zoo which is about four blocks away. Just outside of the historic centro, the neighborhood only has a smattering of colonial homes. The rest of the homes are like this one... built mostly of cement block (except for the garden walls) and built in the mid to late 20th century. The neighborhood is not filled with expats. On the contrary, this house is one of the few in the neighborhood owned by a foreigner, and so the owner is able to enjoy the unadulterated Merida neighborhood experience, from children coming door-to-door looking for school donations to the neighborly experience of sitting out on the street chatting after dark.

What she found after moving in was that, besides the neighbors, there was a lot that the area has to offer. It is walking distance to a major grocery store (Chedraui on Itzaes), the Zoo, the Bellas Artes building complex and Parque de La Paz, and to Avenida Itzaes, which in that area is a good place to walk a dog (or a human!). In the opposite direction, the heart of downtown is about twelve blocks away, walking distance as long as it isn't too hot. Easy for taxis to reach and find, and yet far enough away from the centro historico to have plenty of parking on the streets and less traffic.

Suffice it to say, the owner feels she made a good choice and is extremely happy with her humble and happy abode. 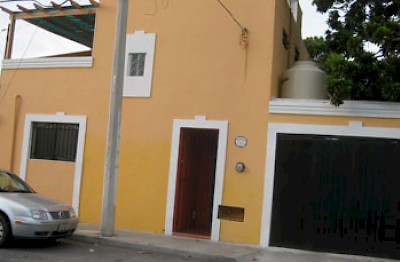