It has been a long time since we've reported on the progress of building our house here in Merida. The reason for this will become apparent now as we continue the story.

By September of last year, we still had not received a finished design and detailed presupuesto (cost estimate) from our designer and contractor. We had launched this project in May and still didn't know if our new house could be built within our budget. We wanted to move in by Christmas (having sold the house we are living in more quickly than we expected), so we had decided to start construction before either the design or the cost estimate was completed.

Construction continued as we finalized details of the design and began to discuss and pick out floor finishes, window treatments, doors, etc. We bought 22 ceiling fans to make sure they would be the same throughout the house, for instance. We picked out a pool filtering system (in our case, for a saline pool). And all the time, we continued to ask for the detailed presupuesto of the project. Every week, we measured the money our contractor was spending against the initial general estimate we had received, and we began to worry that we were already creeping seriously over budget. We brought it to our designer's attention and were assured that everything was fine. Never ones to panic without good cause, we decided to wait for the detailed figures.

During this time, we ordered concrete columns that would be installed around the inner courtyard. When they arrived, they were not the ones ordered, but our designer either didn't realize it or pretended not to. Whether due to lack of communication with the supplier or poor project management, this left the crew milling around the property while we waited another three weeks for the right columns.

Finally, at the end of October, we were presented with a presupuesto that we were told was complete. In presenting it, we were also told that while the cost per square foot was about what we had originally expected, somehow the areas now considered to be part of the square footage had increased dramatically. Bottom line: a cost estimate almost twice what we had said we could spend. And just when we were digesting that nugget of unpleasant information, we were told that due to time constraints (!), this "complete" presupuesto was still missing built-ins (things like counters in the kitchen and bathrooms), as well as cabinets, stairs and other miscellaneous items. Miscellaneous, but eminently necessary!

We went home. We talked. We worried. We argued. We took deep breaths. We slept on it - fitfully. Our appetites vanished. After a few days of this, we called and stopped all construction. We pulled everyone off the project and decided that now, at the very least, we had good cause to panic.

Let's back up a bit. We chose our original designer/contractor because he was a well-known professional who had lived here for over four years. He hadn't done a lot of architecture or contracting work, but he had done some renovations, and he and his partner were respected designers and business people. We also chose him because he assured us that we would be his only client while our house was being built, that we would receive his full attention and our budget limitations would be respected.

At this point, it became obvious to us that he had designed a house that could not be built (by him at least) for anywhere near the money we had budgeted for the project. Our original budget of $180,000 US had been sacrificed over the course of the past five months, growing to a maximum of $240,000 US, which reflected realities we had accepted along the way. But to finally see - after a five month wait - a price tag of almost twice that amount was stunning.

It was a big, painful step for us to stop construction. It caused us to lose a lot of sleep, trust and esteem. But it was nothing compared to the time, money and peace of mind we would have lost had we continued. We shudder to think about it.

So we found ourselves stuck with a partially-built house, unfinished perimeter walls, a half-started fosa septica, a half-built pool, a design for a house we couldn't afford and not much else. Sort of a recipe for a Yucatecan nightmare.

We took more deep breaths and wandered around the house muttering to ourselves, but eventually did what we should have done in the first place. We asked our friends and acquaintances for the names and phone numbers of architects that they recommended. We did the leg work and took the time to learn as much as we could about the right way to do things. This effort resulted in our article, How To Build a House in Yucatan. We interviewed several architects, showing them our half-built house and asking them to propose a re-design and "really complete" presupuesto, and to tell us what they would charge to do that. It turns out they were all native Yucateco architects, trained here at the UADY architecture school and all had been working in this area for many years... just not necessarily for norteamericanos.

We then chose one of these architects to continue with our project, though we could have afforded to get a presupuesto from others (they each charged roughly $3,000 US for a house design and detailed cost estimate). Within a week our chosen arquitecta had assessed the project. Within a month, we received a final redesign (as a result of multiple meetings between us) and within another two weeks (!), we had in our hands a very detailed and complete presupuesto. The square footage of the house was not changed appreciably. We retained the rooms and functionality of the house as before, incorporating what has already been built. And the budget is just slightly over $240,000 US. Everything included, down to the authentic tejaban, iron railings, patio stones and, yes, the kitchen sink.

This week, our new architect is meeting with INAH. We plan to sign the contract next week and then begin construction anew. We'll be living in our house, ojalá (God willing), by Christmas 2007, a year later than we planned. While we wait, we rent.

To summarize, here are the five most important lessons about building a house in Yucatan that we have learned (so far):

Go Local. If you're a budget-conscious Yucateco transplant like us, it pays to go with a local architect/contractor. There are a lot of eminently qualified Yucateco architects who speak English. They know the area. They understand the climate, materials and local building practices. They have connections with the people that sell concrete or do the plumbing and they know what things should cost. They are more careful about getting the most for your money. There are gringo architects/designers/contractors in Merida and have been for a few years. Some of them are good at what they do, but they charge top dollar. Some of them will be learning the ropes on your dime; why should you pay their tuition?

Sign a Contract. We were under the impression that Merida was still a little loose even today when it comes to contracts for this sort of thing. When we renovated our office, we had a handshake with our Spanish-speaking Mayan contractor and everything worked out just fine. But Merida isn't a backwater town. Construction contracts are perfectly acceptable and any architect worth his/her salt will sign one. They don't always like working this way, but they will. If you are doing a modest renovation and working directly with a contractor, you may not need a contract, but you should have an agreed presupuesto. A friend who was born and raised here, but works in the construction industry in the States, told us that you should always have a contract so that the builder has some skin in the game.

Get References. We thought we knew our designer/contractor well enough that we didn't need references. We were wrong. References are the most important way you can know how well someone does their job and what kind of jobs they've done. If you are renovating a colonial home, get references from people who did the same thing. If you are building a new house, get reference from people who did that. Every architect has his or her area of specialization and experience. It can make all the difference when you choose one who fits your project.

Get the Permits. Be sure that your architect or contractor is getting all the right permits and is paying Social Security for your workers. There was a day when you could get away without doing these things in Yucatan, but that day is past. If your architect/contractor says you don't need the permits, make him get them anyway or find another person to work with. If you don't want to pay fines to the Government or have your project shut down, be sure that your contractor complies with the laws. Besides, INAH is trying to preserve the colonial character of the city and the workers deserve their social security. Why fight it?

Be On Site. As much as you can, visit the job site. Watch the progress carefully. Even a wonderful contractor has been known to put a wall in the wrong place. If you are watching too, you might catch the mistake. In any case, you're the one who will have to live with it if you don't.

In reflecting on our experience, we are chagrined to find that it wasn't the locals that misreprented themselves or took advantage of us, as many norteamericanos might fear when undertaking a project like this. It was a fellow expatriate. Do we think he did it on purpose? We hope not. Giving him the benefit of the doubt, we think he bit off more than he could chew and couldn't admit it. But because you don't need a license to build a house here, people are free to do that. And we were free to make the decision to hire him - in retrospect, the wrong decision - but we appreciate that we were free to make it.

In Mexico, if you fall into a hole in the sidewalk, there is no one to sue. You are free to fall into any hole you want. The Mexican culture figures you are the best person to decide if you like falling into holes or not. The same goes for doing business here. We fell in a hole and have nobody to blame but ourselves. But we're equally free to scramble out, dust ourselves off and learn some very useful things about falling into holes.

Stay tuned for more updates on the progress of building our house throughout 2007. 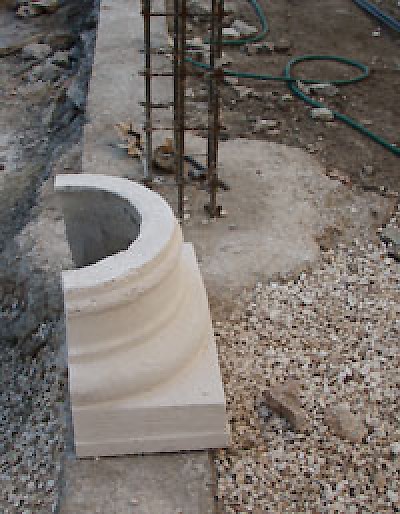 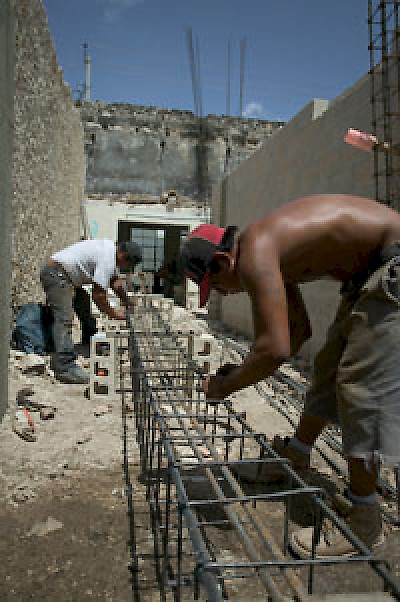