Pottery Lives On in Valladolid

Editor's Note: Here's a piece by one of our regular writers, Bryon Augustin. It is a story about a local artisan who has learned his craft from his elders and continues to pursue it. In the early 21st Century, we are happy to see that increased tourism and attention from the world outside the Yucatan is starting to bring interest in local arts and crafts. We hope that continued interest will inspire more young people to pursue and perfect these crafts, to the benefit of all. In Muna, there is a master potter, Patricia Morales, who makes work that is bought and shown around the world. Another elderly man on the road between Valladolid and Tulum has perfected the craft of sculpting to copy many of the sculptures found in the Maya archaeological zones. Pottery was once a popular art amongst the Maya people, but much has been lost in the last half of the 20th century. We are pleased to bring you a story of a young man who is not only pursuing his family's and his people's craft, but teaching it to other young people as well.

The San Roque Museum in Valladolid is currently exhibiting a small collection of clay pottery designed and sculpted by a young Uayma artisan, Jose Virgilio Espadas Xooc. The exhibit, arranged through the efforts of Francisco Alcocer, a museum host and Antonio Centeno Mena, the museum director, is housed in four display cases in the center of the museum. It opened on March 6, 2013 and will continue through the month of April. Maya clay flutes and water whistles are Xooc’s specialty, but water pots, incense burners, tortilla warmers, traditional Maya figurines, and other objects are also on display. In addition, one display case features the traditional tools and materials that Jose Virgilio used to make the sculptures.

The pottery is exhibited in conjunction with a program that allows Virgilio to teach local students the traditional techniques the Maya used for centuries to produce their famous clay sculptures. On Tuesday and Thursday mornings, six students study theory and technique during the first half of the class period. The second half of the class is spent practicing what they have learned by making their own designs and sculptures. A second class of six different students is held for six hours on Saturdays.

Virgilio loves to teach and share what he learned from the master potters in Uayma who taught him. He became a student of pottery-making at the age of seven and has been honing his skills for the past 16 years. He was tutored by one of the Yucatán’s most noted clay sculptors, Juana Dzul Cob, who is featured on the cover of an out-of-print book entitled 'La Alfareria Maya de Tierras Bajas' or 'Maya Pottery of the Lowlands'. Juana was Virgilio's aunt, as was his other teacher, Antonia Dzul Cob. Both women died recently, leaving the pottery legacy in the hands of Virgilio's other teacher, his father Jose Emilio Espadas Dzul, and Virgilio himself. Juana was previously the most famous potter from Uayma, and her work was featured in the aforementioned book, which was written by Sergio Torres Quintero and Catalina Rodriguez Lazcano and published by the National Institute of Anthropology and History (INAH). Virgilio, who has taught pottery classes at Uayma and Ek Balam is unlike a lot of children in Uayma, because he has stayed and learned the family traditional business of pottery.

In the past, Uayma was quite well known for its pottery but most of the younger people chose not to stay in a small village. Instead, they left for Cancun, Merida, and Valladolid to seek employment in jobs that were easier and paid more. Learning to be an accomplished potter takes many years and a lot of practice. Many of the traditions are being lost because it is hard to keep the younger generation interested in the skills necessary to become an accomplished potter. Virgilio has recently married and he hopes that some of his children will remain in Uayma and learn the pottery business so that the tradition will continue in the future. He is currently building a thatched roof studio to work in which is located next to the two kilns on his father's property.

Pottery Ingredients in the Yucatan

In addition to training, another important element in making pottery is an easy and steady source of material, in particular the clay which is the largest ingredient. The original source of the clay used by Virgilio's family was within a kilometer of the village. Unfortunately, the municipality of Uayma decided to make that spot a solid waste disposal site. Now Virgilio and his family must go to a local farmer about 4 kilometers from Uayma. He charges them 40 pesos for a 30 kilo bag of clay, but they believe there is enough clay there to last their lifetime.

The materials used to make the clay sculptures are the same materials the Maya used for centuries. All of the necessary ingredients can be found within four kilometers of Uayma. They include clay (barro), a shiny rock called a jip, a reddish-colored rock (p’ich), and sascabe, a soft, chalk-like material that weathers from limestone, red soil, and cenote water. All of the solid ingredients are ground into fine particles before making the final mixture. Different recipes for the mixture are used depending on what type and color of sculpture the potter is planning to make, and the mixture is part of the art.

Pottery Made By Tradition

The potters use a wooden turning wheel that they turn by using their feet. Water is added to the mixture while shaping the form to keep the clay soft and malleable. Pieces of the dry, hardened shells of the jicara fruit are used to smooth out rough areas. River stones are rubbed over the surface of the clay piece to smooth and polish the object. Surface designs are made by etching the clay with special wooden sticks before it hardens. Those same sticks are also used to shape the holes in clay flutes, which are frequently shaped like animals.

The pottery is designed and made by Virgilio and his family, as well as the work by Virgilio's students, are allowed to dry for 15 days. Then, they are taken to Uayma to be fired in a kiln designed like those the ancient Maya used. Virgilio and his parents have made two, egg-shaped kilns by hand. They are located behind their work-studio home and gift shop in Uayma. The kilns are from a time-honored local design that can be used consistently over a period of 30 to 40 years, and they are works of art themselves.

Wood from a local tree that the Maya call chukum is burned in the kiln to fire the clay pieces. The wood is hard and gives off a very high temperature as it burns. The temperature inside the kiln may exceed 900 degrees Centigrade (1,652 degrees Fahrenheit). This particular wood also deepens the color in the pottery. The clay pieces are cooked for one day and then left to cool for three days. If the piece is designed to hold water, atole is applied as a sealant to finish the object.

The Espadas family of Uayma welcomes visitors to visit their studio and gift shop. Their home is located at Calle 27 X 22 Y 24, within a short distance of the famous painted church on the main square in Uayma. If you are there and can't find their home, just ask someone to direct you to the home of Familia Espadas.

On Sunday, April 28, 2013, at 7:00 PM, a ceremony will be held to recognize the work of the students who will have completed their studies with Virgilio. The student celebration will be held in the San Roque Museum on Calle 41 X 40 Y 42 in Valladolid. The public is invited. Virgilio's pieces will be removed from the display cases before the event, and the students’ work will replace them. The student pieces will be exhibited for approximately the following 15 days.

For more information on the lovely village of Uayma, read our article on Uayma here.

Read about the San Roque Museum in Valladolid here. 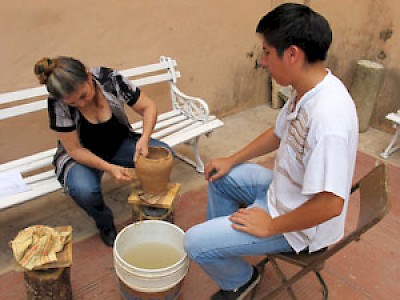 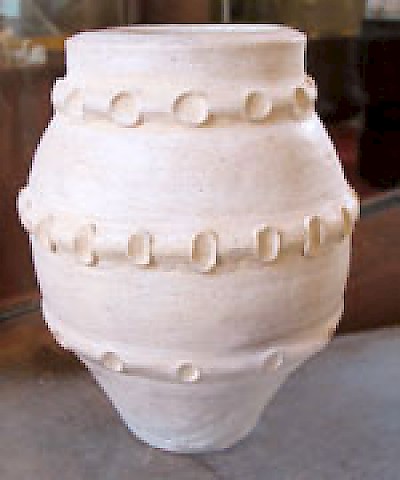 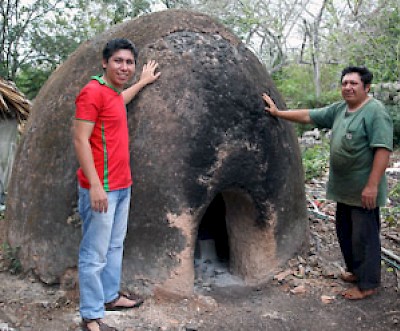 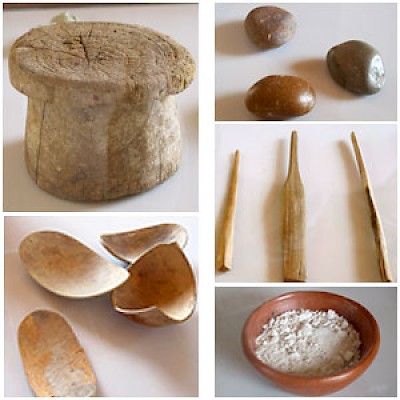 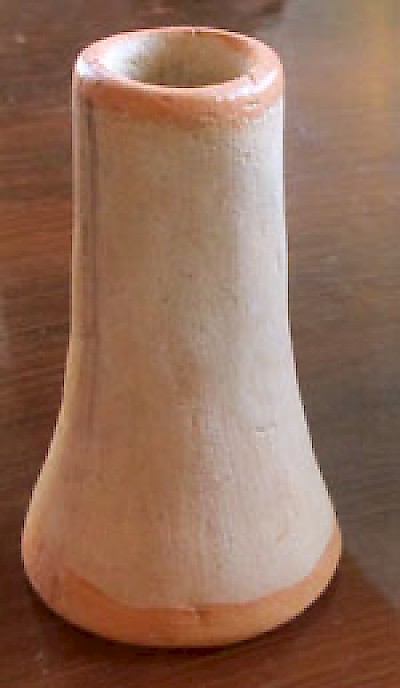