The publishers of Yucatan Living, James and Ellen Fields, lost their son Dustin on November 9th. He died unexpectedly in his sleep and was 30 years old. His ashes were divided among family and friends. James and Ellen scattered their portion in the Caribbean near Akumal, the location of Dustin's first SCUBA dive trip to Mexico. Dustin's obituary can be found here. Dustin's father wrote the following "Brief History of Dustin Fields", which he read at Dustin's memorial service:

Dustin came into being like the Roman emperors - by cesarean - and he ruled his world. His hair glowed like a golden crown in the sunlight. The freckled boy-king honored his mother and father through the ritual of slinging libations from his highchair throne.

He stood up early, but he spoke late. His first word after learning “no” was “yes”.

He delighted in the birth of his sister Denise, because he knew in the years ahead his reign would require an apostle, a charming assistant, an able conspirator and a steadfast confidant.

He thrilled at the speed of his big three-wheel chariot. He went on long “explores” to the Chalk Mountaintop where he discovered discovery, and the comforting perfume of his Earth mother.

When first wounded in battle, the scar on his face was transformed into a dimple.

Luke Skywalker, Han Solo, Chewbacca and the universe of Star Wars joined his world, and he lived for a time in galaxies of imagination, far, far away.

All great kings are given gifts in threes. It was at this time in Dustin’s life when three prophets arrived, one each for Dustin’s body, mind and spirit.

The prophet for his body was Tony Hawk. Dustin’s chariot was soon replaced by a four-wheeled, land-speeder called a “skateboard”. Proclamations such as Drop-Ins, Ollies and McTwists were heard throughout the land. And it came to pass that blueprints were summoned to build a special ark measuring various cubits, on which “shredding” would be practiced as a religion, and it would be called “Dustiny”. Followers paid pilgrimage and there was much ska and rejoicing.

The prophet for his mind was the famous sage, David Copperfield, master of illusion, of the inside joke and of the mind-fuck. Dustin’s technical skills with Chinese linking rings, invisible thread and the hidden mysteries of levitation would eventually evolve into the prestidigitation of Visual Basic, C++ and dot net software, turning inanimate boxes into magical things of wonder. And the crowd was amazed.

There was once a humble pueblo in México called Paricutin. One day the cornfields withered, the earth heaved and the streets of the village fumed. Before anyone could react, a volcano sprang up, erupting with winds of change and altering the landscape forever.

At this time the third prophet arrived, the prophet for Dustin’s spirit, and his name was Edward Vedder. Dustin soon learned the Ten and the Versus, through the bass guitar of Jeff Ament. In this discovery, his companion Denise endured the baptism of the mosh pit and the ritual of the pop quiz more than any of Dustin’s other disciples.

Dustin was befriended by a refugee from Mexico, who became his hermano grande, Rene Sanchez. They shared the teachings of Jimi and of Zeppelin and of the rock that will never die. Neil Young became Dustin’s godfather, YES was his choir, and Mars Volta sang serenades.

From ashes and song sprang a reinvented Dustin, no longer the freckled boy-king, but a philosopher-warrior on a quest. The new landscape demanded that he scale unexpected heights, and so his attention turned to the mountain bike and the steep climb over unyielding stone. He would no longer explore the mountaintop; he would conquer it.

Sadly one night, Sean stepped too close to the edge, and Dustin accepted that we are only immortal for a limited time. He became the Traveler, moving as easily from Big Sur to India, as from one universe of friends to another. From his poker table at home to the World Series of Poker in Vegas, from the tennis court to the basketball court, from the Carlton to the Guest House, from Yucatan to Bali to a Thai restaurant actually in Thailand, his feet almost never touched the ground.

There were times when Dustin’s world went black, and he would rather starve than eat its bread. He would, however eat and drink almost anything else, whether it was to expand his mind or tame it. Marijuana, Lysergic Acid Diethylamide, Methamphetamine, and recipes from the bartender’s guide were all tasted and critiqued, the final winner being Long Island Ice Tea.

Bob Combs and a metaphorical mountaintop of books, written by writers living, dead and otherwise, were his private guides through his fear and loathing. A complete bibliography of Dustin’s reading list was prepared for this history, but unfortunately, it was eaten by Schrödinger’s cat.

Like Laker games at Grandma Bonnie’s, with his teammate and cousin, Eric.

Like being on “the porch” with Matt and Katie.

Like pestering his “bastard” sister Aryn (look it up).

Like simply being with his brother-in-law Ryan and our new boy-king, Eli.

And always, behind his back, he could feel his mother’s protective chant of “Nam Myoho Renge Kyo”.

At the end of Dustin’s sweet, bitter, complicated but really rather long life, he received two great rewards: the Healer and the Dream. The Healer, of course, was his comforter, his foil, his mirror and his novia, La Tuerpa, who most of us call Michl. The Dream was to have, at least for a brief time, la vida nueva, in México.

In the final analysis of our subject, the boy-king, the explorer, the philosopher-warrior, the Traveler and ultimately the mere mortal we came to know, the better man who would be our friend: he was always seeking, in his own sarcastic way, to learn the truth. And in the end, history will record, that Dustin discovered the greatest truth you’ll ever learn is just to love and be loved in return. 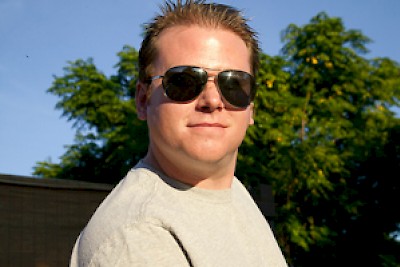