"Pick up on table 4!", the kitchen calls the wait staff.

It is a Tuesday in February at Ceibacci, a Mexican/Italian restaurant at the UVM-Glion School building on the campus of Universidad del Valle de Mexico in Merida. These fifth-term students are learning to operate a restaurant with some on-the-job training. Every semester, a new crop of fifth term students create and operate a restaurant concept of their own creation for one month. The lucky students getting this valuable experience are attending a nine-semester graduate program in Hospitality at the Glion Institute of Higher Education, located in the Universidad del Valle de Mexico, just outside of Merida on the Progreso highway. Glion Institute of Higher Education is a top-rated, Swiss-based Hospitality school that operates satellite schools in Mexico, Costa Rica, Panama, Brasil and Chile. In total, there are sixteen UVM-Glion schools in Mexico alone, and one of those is here in Merida, Yucatan.

In their fourth semester, students form teams of four to five people and compete for the "Golden Fork", the grand prize, which allows the winning team to have their restaurant concept developed into a restaurant that they will run for one month.

Each semester at UVM-Glion, students are taught skills in Culinary Arts, Human Resources, Food and Beverage Management, Marketing, Finance, Hotel Management and Languages. In the fourth semester, students learn Menu Creation, Budgeting, Staff Management, Food and Beverage Costing, how to create profit/loss statements and more. By the fifth semester, students have learned the skills to operate a restaurant of their own creation and receive the best education that only a 'hands-on' operation can provide. The whole fifth semester is based on analyzing the data from their restaurant and other case studies to learn how to maximize profitability without sacrificing service or quality.

In addition to the more traditional classroom learning experiences, this university has a program that provides for a new restaurant each semester that is developed and operated by the students. The restaurant caters mostly to the campus but is also open to the public. September and February are restaurant months and the students are eager to please their guests. In February 2012, a few guests from the Merida Men's Club tried the fare at Ceibacci and gave the restaurant rave reviews. Expat and Merida Men's Club member, Greg Fryer, is the Food and Beverage teacher for this unique program. He told us he has to be a little more critical when the restaurant is in session, but can still attest that the students do a good job.

Greg Fryer, an expatriate originally from Canada, is the Food and Beverage Leader for Southern Mexico at the Glion Institute of Higher Education. In his former life, Greg was a chef in restaurants in the Vancouver area for over 30 years. Cooking was his first job at age 15 and he worked consistently in that field until he moved to Merida in 2004. Greg was the opening chef at three successful Vancouver restaurants. He also owned his own restaurant with his wife, his best friend and "partner in crime". Greg says he is not a "five-star" chef, but prides himself on running an efficient and profitable kitchen.

When Greg and his wife had the opportunity to retire, Merida seemed to be a more interesting and exciting place than where they were living at the time, so they packed up and moved here. Despite his retirement, Greg found time to teach English at C.I.S. in Merida for 6 years. He also volunteered at the Merida English Language Library and gave his time and attention to other worthwhile causes. One day a teacher from UVM, Robert Kerbawy, contacted then-library-president, Reg Deneau, asking if he knew of any members of M.E.L.L. willing to give a talk to high school students about food and the experience of being a chef. Reg knew Greg from his volunteer work, and contacted him with the opportunity. Greg gave several talks at the University on various topics, and eventually was asked if he would be interested in teaching a Food and Beverage class within the UVM-Glion School. The class needed to be taught in English by an experienced chef, and it was a good opportunity for the school and for Greg. As luck would have it, Greg ended up working for Ana Mandujano, someone he knew by sight, as she sits just a few seats away from the Fryers' regular seats at the Leones baseball games!

Greg told Yucatan Living about this "hidden" restaurant in Merida, and reported that he is having great fun with the Food and Beverage students. Greg is now teaching three different semester classes. Last semester Glion Institute of Learning promoted Greg Fryer to Leader in Food and Beverage for all of Southern Mexico. Greg isn't sure if the job with Glion fell into his lap or he fell into theirs, but either way, it has been a good fit for everyone involved.

One of the questions in the Yucatan Living Interview for expats is “Are you doing what you thought you would be doing in Yucatan?” The answer is almost always “No”, and then the expats go on to describe wonderful experiences. Greg Fryer is another expatriate in Merida having an experience he never imagined before he moved to Mexico. They say “Success is where preparation meets opportunity.” Greg Fryer seems to be experiencing a success he never expected. As for us, we are marking our calendars for September and plan to be first in line at the doors of Ceibacci Restaurant when they open again with their next crop of soon-to-be successful students!

Editors Note: Thanks to Greg Fryer, Food and Beverage Leader for Southern Mexico at the Glion Institute of Higher Education, for the information in this article.

Interested in seeing what this is all about? September 2012 will be the next opportunity for the public to try the month-long restaurant at the UVM-Glion School and contribute to the continuing education of another great bunch of students. The theme of the restaurant is being decided by the students as we write this article (May 2012) and the new restaurant will open on September 3, 2012. It will operate for one month, probably from 8 AM to 6PM, Monday through Friday. It will be closed on September 16, like everything else in Mexico. When the restaurant is open, no reservations will be needed. Directions from Merida are to head north on the Progreso Highway and take the Dzitya exit, doubling back around towards Merida. The UVM building will be on the right. To get to the restaurant, enter through the manned gates and park where directed. The restaurant will be in the Glion building. Mark your calendars for a new Merida dining experience! 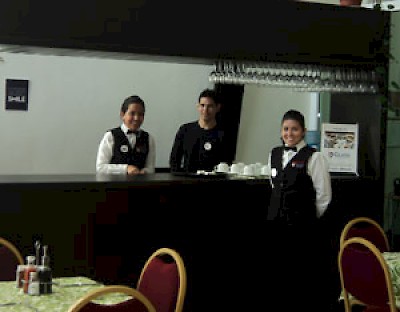 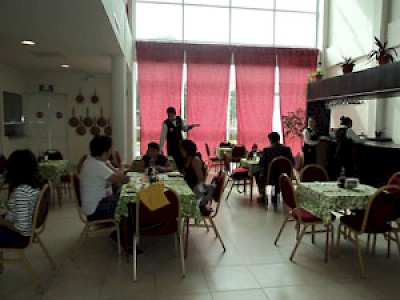 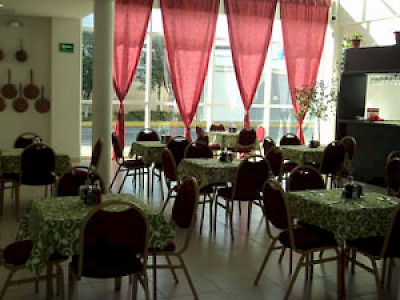 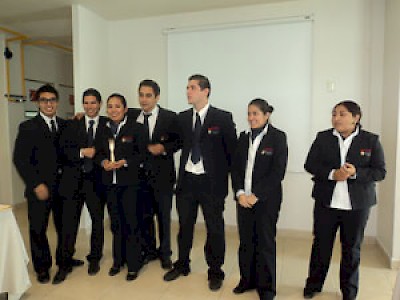