A vain and silly bird

The turkey looms large over the Americas. A popular myth asserts that Ben Franklin even desired to make it the national representative of the US Republic. He was merely expounding on the virtues of turkeys when compared to eagles, writing in a letter to his daughter that, "...the Turkey is in Comparison a much more respectable Bird, and withal a true original Native of America… He is besides, though a little vain & silly, a Bird of Courage, and would not hesitate to attack a Grenadier of the British Guards who should presume to invade his Farm Yard with a red Coat on.”
-- Smithsonian

Despite its popularity with American colonists, the bird's original roost is in Mexico. That explains the genus name of wild turkeys, which is "gallopavo."

"Turkeys were domesticated in ancient Mexico, for food and/or for their cultural and symbolic significance.[4] The Aztecs, for example, had a name for the turkey, wueh-xōlō-tl (Guajolote in Spanish), a word still used in modern Mexico in addition to the general term pavo. Spanish chroniclers, including Bernal Diaz del Castillo and Father Bernardino de Sahagun, describe the multitude of food (both raw fruits and vegetables as well as prepared dishes) that were offered in the vast markets (tianguis) of Tenochtitlán, noting there were tamales made of turkey, iguana, chocolate, vegetables, fruit and more. The ancient people of Mexico had not only domesticated the turkey but had apparently developed sophisticated recipes including these ingredients— many used to this day— over hundreds of years."

The Ocellated Turkey native to Yucatan is a less common species of the genus Maleagris (ocellata). The bird was a dietary staple for the peninsula's native inhabitants and is ubiquitous in the region's cuisine. Mayans would have been enjoying turkey dinners with all the trimmings hundreds of years before the Spanish conquest. It still accounts for a substantial amount of the diets of at least four of the area's prominent ethnic groups.

Ocellated Turkeys experienced a significant decline in population due to changing land use and overharvesting, but was taken off the endangered species list around 2003. "The ocellated turkey lives only in a 130,000 km2 (50,000 sq mi) range in the Yucatán Peninsula in Mexico—which includes all or part the states of Quintana Roo, Campeche, Yucatán, Tabasco, and Chiapas—as well as the northern and western parts of Belize and northern Guatemala."

The Maya once worshipped turkeys like gods. Although they imported turkeys from Mexico, Ocellated Turkeys were a status symbol owned exclusively by the rich and powerful. They were used as sacrifices, as material to make brilliant feathered capes and represented the ability to trade at long distance. They were also thought to have power over the word of dreams.

Be sure to check out all the links below as there is plenty more to learn about this stately fowl. Leave your turkey thoughts in the comments below and... 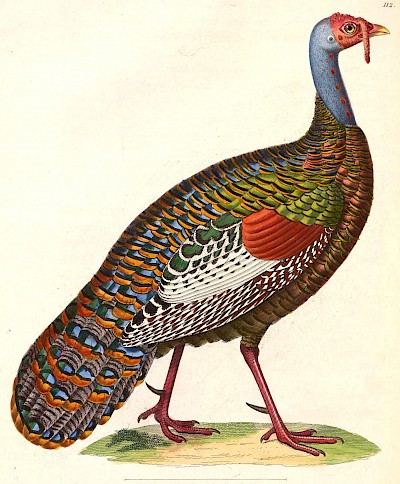 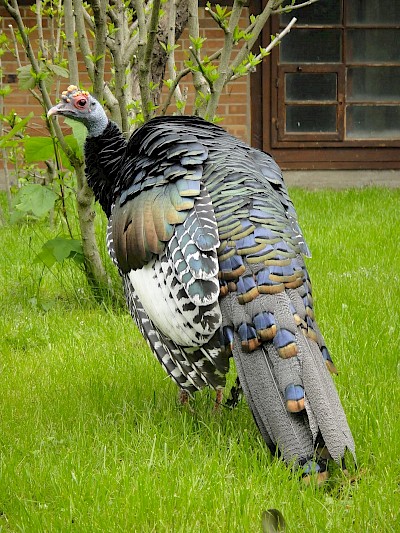 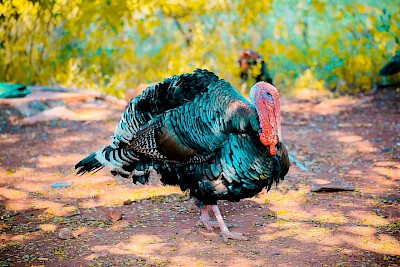