The Maya Riviera Recovers from Wilma

Hurricane Wilma struck the Maya Riviera coast of Mexico on October 21 and 22 of this year. Seven weeks later, the damage is still visible in many places, but the recovery is remarkable.

We started our recovery recognizance in Tulum. It was so beautiful there, we had to stay for three days (see former post). Tulum was evacuated, and did sustain damage. But because the nature of Tulum is that of an eco-resort, the damage seemed minor and not as obvious as in the more "civilized" areas. The beach, which is usually a great place to pick up driftwood and small pieces of white coral, was instead littered with more dead sponges and coral than we had ever seen.

People who have visited Tulum might know Zamas, a popular hotel and restaurant on the beach. Zamas was open and busy. There was a group of 65 people there from New York attending a wedding, and lots of other tourists. In fact, although there are signs up and down Boca Paila announcing vacancies, there seemed to be a healthy amount of tourists. Maya Tulum was due to open last Thursday and when we were there, they were still putting up the palapa roof on the main dining building, and apparently taking this time to not only repair a few of the casitas, but also build some new ones. The workmen were working around the clock and were cheerful and friendly, even at 6 in the morning!

The road just south of Zamas was partially washed away, as you can see by the photo, but the rest of the road seemed fine. We did see a lot of trucks filled with the raw palapa material (bunched palm fronds) parked on the side of the road as well as a few trucks laden down with full-grown palm trees on their way up to Cancun. There was a lot of detritus from the storm piled up on the side of the road in various places, but the beaches of Tulum are as beautiful and big as ever, and the water was clear and inviting.

Moving northwards, we stopped in Akumal, a favorite place of ours. The Turtle Bay Cafe gets our "Best Gringo Breakfast of the Year" award for the third year in a row. They make their own baked good there, including muffins, cinnamon rolls and sourdough bread. And they have great egg dishes, tocino (bacon) and cappuccinos. Its a lovely shaded outdoor cafe with sarongs as table clothes. All of Akumal appeared to be back in business, including the dive shops. We talked to two dive instructors on the beach, and they said the shallower reefs were a bit torn up, but the deep dives are just as beautiful as ever.

When we were there, the beach and the water looked fabulous. There was a group of snorkelers getting ready to go out for the morning. A few buildings still needed some repair, and there were a lot fewer trees than we remembered from our visit about a year ago. But all in all, Akumal seemed to have survived well.

On to Puerto Aventuras. Driving in, we were greeted with a huge construction project on the left side as you enter. They seem to be creating a whole new marina, as well as building various condominiums and hotels along the marina. We parked and walked around the existing marina, which didn't appear to have sustained any major damage. The Swim-With-The-Dolphin programs were in full swing, even as roofs were being repaired around them. Again, there seemed to be plenty of tourists, though we did notice one hotel (I forget the name) still wasn't open and there were piles of escombro that had been cleaned up and were waiting to be removed. The most ubiquitous damage in Puerto Aventuras appeared to be to their tile roofs, a construction element that isn't present in most communities along the Maya Riviera. Most of the shops were open and the marina and walkways looked fine.

Playa del Carmen was a beehive of activity everywhere except the beach. Some of the streets were blocked off as they are being repaved. Avenida Constitutuentes was open and full of traffic. There were new stoplights since last April (the last time we visited) and a huge new building being constructed (shopping center?) where an empty lot used to be. Hotels and large structures seem to be going up on every available empty lot within two blocks of Fifth Avenue.

The Porto Real Hotel was still repairing various balconies and windows, but both the hotel and its new twin across the street that houses condos were open and busy. On the beach side of the hotel (see photo), there were a lot of brand new palapas and the beach looked pretty nice. But the water was dark and cloudy unlike everywhere else we went that day.

Downtown Fifth Avenue wasn't as crowded as we remembered it from last time, probably because the cruise ships aren't stopping there yet (although they have started this week, they aren't up to their usual strength). It seemed like Playa is taking this opportunity to step up the pace of development and we couldn't believe how much new building was going on. In fact, it was a little hard to tell what was repair from the hurricane and what was new construction. In about six months, Playa is going to look like a new city in many places. But then, that was probably true even *before* Hurricane Wilma.

Lastly, we drove on to Cancun. There really is a difference between the state of Cancun and the places to the south. Cancun really looked wounded and like it had been hit hard. We were amazed at how many workers there are. There must be a lot of money pouring into Cancun right now. Truckloads of workers were being transported here and there throughout the Zona Hotelera. There were a lot of roadside stands set up selling hot food steaming in big pots over open fires. It seemed that every hotel, shopping center and restaurant was being worked on. We saw a few new cell phone towers that were already reconstructed. And a lot of people working on infrastructure like electricity and phone towers.

There were so many trees down or missing all their leaves. It is a stark contrast to the usually lush tropical green environment that surrounds the hotels and restaurants in the Zona Hotelera. Most of the trees looked dead, though from experience we know that in three years, you won't be able to tell that there was a hurricane. It has been three years since Hurricane Isidore here in Merida, and there's no sign of it left.

We did see some tourists...or people who appeared to be tourists. The weather was beautiful, as you can see in the picture, and the water was as clear and blue and warm as always, though that particular day there were waves and the water was a little rough. Many of the beaches have disappeared, but certainly not all of them. We spoke to two lifeguards at the public beach at the south end of the Zona Hotelera (the photo above was taken from that beach) and they said there are still four places along the coast of Cancun where there are very nice beaches. Most other places have rocks right down to the water. Still, as I looked in both directions, it seemed to me you could walk along the beach in front of most of the hotels. And the whole area is still a lovely place to be. I'm sure any tourist that goes there now gets a great deal on rooms and food.

There were signs everywhere saying "Cancun is on its feet" and "Opening soon". And after touring the area, we believe it. Cancun may have been humbled by Hurricane Wilma, but it wasn't defeated. It is apparent that it will be back better than ever and very soon. One of our friends who lives there recently emailed us and put it this way: In these parts, Cancun continues to rebuild itself at a break-neck pace. The city is largely back to normal. The devastated Hotel Zone is springing back also, although somewhat more slowly. The first reborn hotels will begin to reopen in the next couple of months. Others, like the Ritz-Carlton, will not be done with their rebuilding until April. Nonetheless, the work here has been fantastic.When everything is done here and Quintana Roo is completely reborn, it would be a good idea for the U.S. Army or FEMA or Halliburton or whoever is in charge of the U.S. gulf coast these days simply to contract the entire population of this city and ship them off to rebuild New Orleans. Although few realize it, Wilma was significantly worse than Katrina, yet Quintana Roo has recovered while Lousiana staggers on in desperation.I learned a great deal about the Mexican people through this experience. 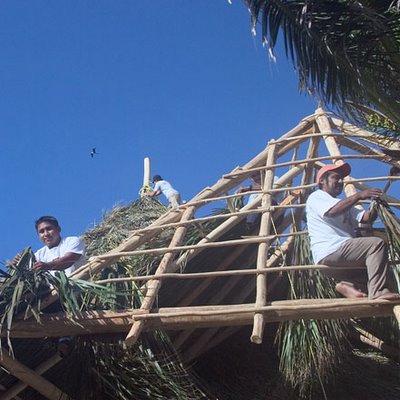 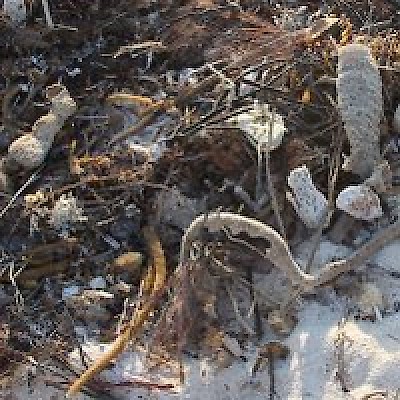 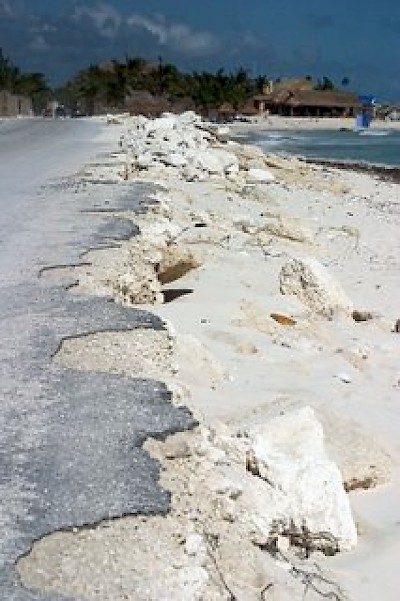 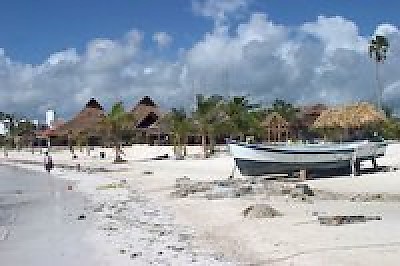 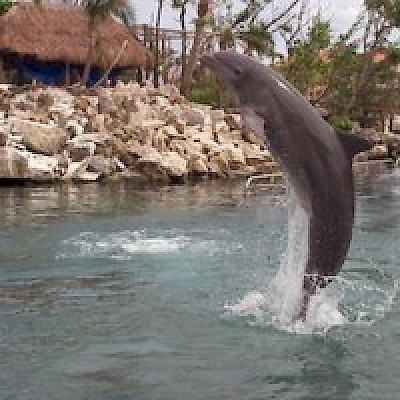 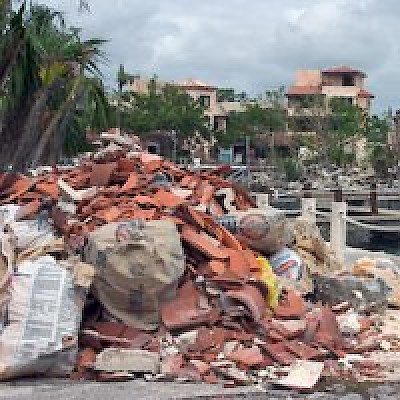 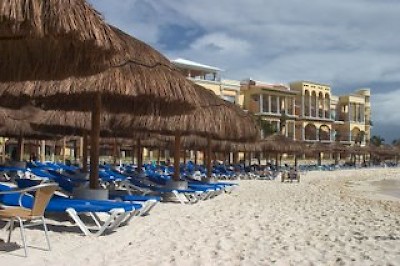 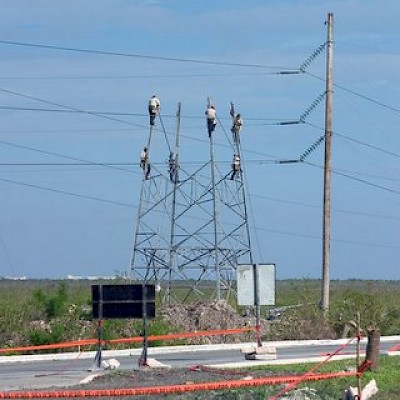 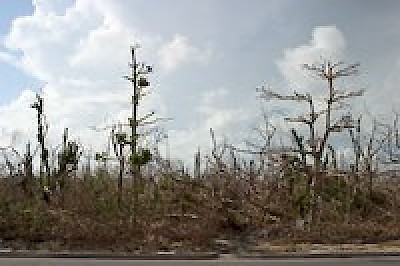 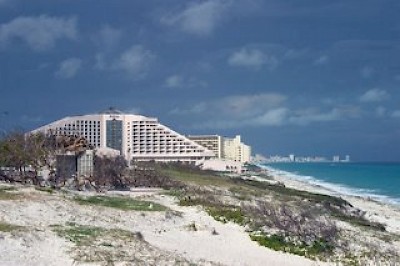