As gringos growing up in the States, we usually learn of only one Mexican holiday, namely Cinco de Mayo or the Fifth of May. This is the day when General Ignacio Zaragoza Seguín led the Mexican cavalry to defeat the invading French army at the city of Puebla in 1862, with the help of a then not-so-well-known general, General Porfirio Diaz. This glorious victory lasted only about 12 minutes, however. Eventually, the French occupied Mexico anyway and installed an Emperor, Maximilian, who also didn't last that long. What is perhaps even more strange is that the general English-speaking public knows practically nothing about the generals involved, especially General Porfirio Diaz, who had such a lasting effect on many things in Mexico, including its architectural history.

El Presidente, as he came to be called, dragged Mexico - kicking and screaming - into the modern world. Using the politics of "pan, or palo" (bread, or the stick), Diaz bribed or threatened his fellow countrymen into adopting "scientific" methods of secular economic and social development, which produced thousands of kilometers of railroad tracks, telegraph lines, factories and an electrical grid. The Mexican congress under Diaz also established the modern Mexican civic state, by enthroning its national heroes and naming its patriotic holidays, including that rather hollow aforementioned victory in Puebla.

Diaz also set out to "elevate" the cultural life of Mexico by importing art and architecture from the Romance countries of Italy, Spain and (ironically) France. This initiative resulted in such landmarks as the Palacio de Bellas Artes in Mexico City, as well as Merida's famous boulevard, the Paseo de Montejo, and the best little opera house on the Yucatan Peninsula: the Teatro Jose Peon Contreras.

To stroll past this edifice near the main plaza on Calle 60 is to be reminded of the many palazzi (palaces) in Florence, while the interior is reminiscent of Italian opera houses like La Scala in Milan. An original touch is found in the faces of the putti, or cherubs, that adorn the mezzanine. Each has a distinctly adult face that seems to be a caricature of an historical person. Some even sport derby or bowler hats. There's a mystery here we've yet to solve.

Working Gringos have attended several performances at the Teatro over the years, mostly of the Yucatan Symphonic Orchestra and some choral groups, and they were splendid. But we occasionally wondered why so few theatrical plays are staged here (or anywhere else in Yucatan that we could discover). Gee, we thought, it sure would be nice to see a play.

This past weekend our wishes were more than answered.

The Yucatan Institute of Culture, which sponsors most events at the Teatro, took the risk of mounting the rather ambitious production – at least for them - of Verdi’s opera, Rigoletto. (rigoletto literally means “little funny one” in Italian and is the word for jester.) The slickly-produced, huge black banner they hung from the façade of the Teatro was emblazoned with the name of the title character, the final “o” a small, brass bell from a jester’s hat laying on a blood splatter.

We must confess, these Working Gringos have seen only a half-dozen operas in the course of our lives and have fallen asleep during two of them. What we know about opera wouldn’t fill this page. So after obtaining two nearly sold-out tickets (first level mezzanine, third box from the stage, first row), we scurried to our Internet connections to do a little research and see what we were in for.

We won’t detail the Rigoletto plot here. Google it if you’re interested. On the surface, it’s about how powerful men destroy an unsuspecting woman. But it’s also a political allegory, originally written by Victor Hugo of Les Miserables fame. It was banned in France for 50 years and re-written to get around the censors in Italy. And if you substitute governments for the Duke, corporations for the courtiers, the media for Rigoletto and us ordinary folk for Gilda, you have pretty much summed up the state of affairs in modern political life.

Or perhaps we aren’t as modern as we thought, despite the best efforts of El Presidente.

So after arming ourselves with everything we needed but opera glasses (darn it), we spent a night in opera heaven. In short, it was magnificent: clever sets, creative blocking, an orchestra that didn’t miss a note (and we heard they were given only a couple weeks of rehearsal), and a convincing and commanding cast from first curtain to final bow.

In our opinion, this opera should have been called "Rigoletto’s Daughter", or maybe just "Gilda", because her character plays the only sympathetic role and is central to almost the entire story. Gilda is as innocent as a little, caged songbird. The many moods she expresses though her melodies, along with the orchestral accompaniment, are often reminiscent of either a plaintive mating call or a futile attempt to take flight.

As performed by Claudia Rodríguez, Gilda was a triumph this particular night, made all the more triumphant because Claudia is a native born Meridana who has studied in Spain and cultivated herself into a very gifted Meri-prima-donna. We still find it difficult to believe that any human being can sing like that. But such is one of the mysteries and fascinations of opera.

There were a couple folksy foul-ups that reminded us that we were, after all, in Merida. A large projection screen had been installed so that a translation of the lyrics could be displayed above the stage. This is a standard feature of opera and we were grateful for it, but the guy who was operating the “next” button sometimes got well ahead of the action and had to flip back and forth to find his place. At one point the display revealed a dramatic and unexpected entrance several minutes before the event.

But these minor irritations couldn't overshadow the magnificent setting of the opera house or this sublime performance of Rigoletto. We would see it again, if only the tickets weren't sold out. Needless to say, we didn't fall asleep and may even have been converted.

The last time Rigoletto was performed at the Teatro Peon Contreras was in 1926 and probably all in attendance were casta divina, wearing tuxedos or evening gowns, with a footman waiting at the carriage and a mestiza back at the mansion to watch over the niños. By 1970, the Teatro had fallen out of use and was abandoned, but productions were revived in the 1980’s and it was restored to its former glory just a couple years ago.

Meanwhile, El Presidente Diaz, having behaved himself a bit like the Duke in Rigoletto, was shown the door and exiled to France (double irony). The Mexican revolution that followed had its good points and its bad, which are still being sorted out to this day. As we sat in the Teatro, we remembered how the program we were enjoying was subsidized by this relatively socialist government, which was why we could see a world-class opera, sitting alongside folks from every walk of life, for less than $20 dollars a seat.

Gracias, El Presidente, for the wonderful opera house, and gracias, La Revolution, for the cheap seats. 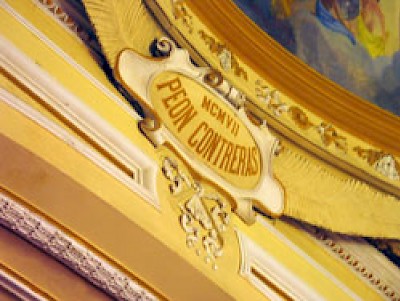 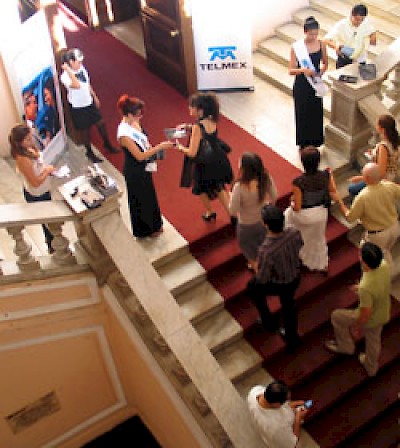 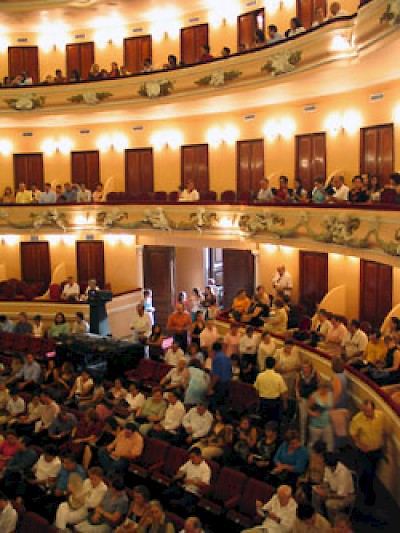 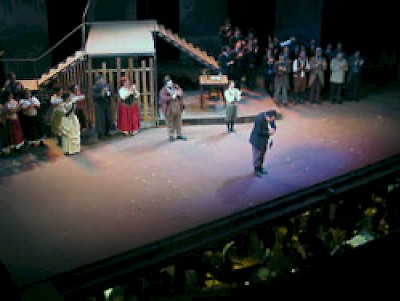 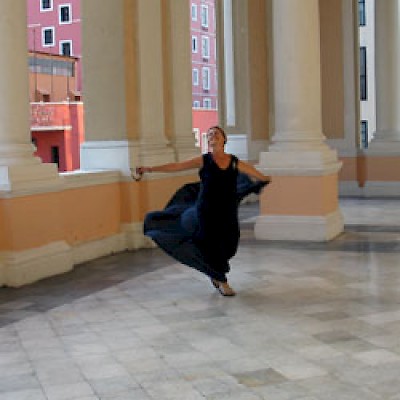