Recovering in the Sunshine

We spent the weekend on the Mayan Riviera, practically retracing our steps from eight weeks ago. The weather was sunny and beautiful, though a bit cooler than usual due to a norte or storm coming down from the north. That didn't seem to stop people from enjoying the beach and the typically clear waters of the Caribbean. In general, our observations were that a lot has been accomplished since Hurricane Wilma did her damage. Some places look as good or better than new, while others are still working hard to get there. But there's no lack of activity or money pouring into the Mayan Riviera.

We'll start with Tulum. First of all, the sky was blue, the sea was green, the sand was white...in other words, the weather and conditions were absolutely beautiful. We visited Hemingway's again, as a benchmark. Paola has completely rebuilt the restaurant building and now has a lovely open-air restaurant overlooking the ocean from which to enjoy an afternoon seafood pasta or a morning coffee. The road along Boca Paila has been cleared of debris and the heavy equipment was just beginning to repair the road between Zamas and Maya Tulum. All the hotels and restaurants are open and in full swing. The town of Tulum was buzzing and busy, with people talking about the new airport that is going to be built somewhere between Tulum and Playa del Carmen.

The highway north of Tulum was fine, with very little evidence of dead trees or downed powerlines. In fact, along the entire highway, power has been completely restored, with all the downed power poles now carted away and new ones in their place. Most of the billboards have *not* been replaced yet, and we like it that way so we're not complaining. In fact, other than billboards put up by the state advertising the recovery, I think I only saw two from private concerns.

Akumal was warm and peaceful. The trees are green again, though there are fewer of them than before. There were dive boats and snorkel tours leaving when we arrived. The locals said that the tourists are just starting to come back, but that business is definitely picking up. The restaurants along the bay looked absolutely pristine and beautiful. If they had damage before, its been repaired and there is no evidence of it. The water was quiet and clear and warm... in short, a perfect Akumal morning.

Playa del Carmen is booming and bustling as usual. Any apparent hurricane damage that we saw last time we were there has been repaired, and there is lots of new construction going on to bring us all a better, brighter and bigger Playa. We had drinks down at the Blue Parrot and the beach was lovely. People were enjoying drinks on the futons down at the beach, listening to music. The water looked much clearer and cleaner than last time we were there.

Up by the Porto Real Hotel and the new pier, there were small waves and surfers catching them. We talked to a gentleman wearing a Che t-shirt who was there from Mexico City to install and repair elevators. Guests were playing volleyball and sunning themselves on the beautiful white beaches.... again, you just couldn't tell that there had been a hurricane. The damage we saw last time on the Porto Real hotel itself has all been repaired and the hotel was open and looked busy, as did all the beach clubs. Fifth Avenue didn't seem as crowded as usual, which again was nice for us but maybe not so nice for the business owners. We think the smaller crowds are probably due to the diminished cruise ship traffic... and that should be coming back soon.

We didn't make it to Cozumel, but we saw regular ferries going out there, and we heard from locals that the rebuilding is going full force there.

Driving up to Cancun, we saw more evidence of the hurricane in the jungle along the highway... a few more dead trees than usual. The road along the hotel zone was just being finished. Probably by the time we finish this article, it will be complete, and the Zona Hotelera will have a totally new road.

The hotels along the Zona Hotelera are in varying stages of reparation. Some of them, like the Westin at the southern end, are finished and open for business. Others, like the Hilton, still seemed to have a few boarded up windows. The Riu hotels at the center of town looked as good as new, but the shopping mall housing the Planet Hollywood is still under serious reconstruction. In general, Cancun was crawling with construction workers and gardeners. The median on the highway has been completely renewed and replanted. Lots and lots of damaged palm trees have been removed and new ones have been planted in their places. The beautiful grounds of hotels like the Ritz Carlton are green and pristine again. Teams of palapa workers were seen building brand new palapa roofs.

In general, Cancun is crawling with construction workers from all over the country... and not too many tourists. The workers all seemed to be enjoying themselves and working hard... enjoying the sunshine and good weather of Cancun while making some good money to take home to their families.

Next week, we'll be going back to all these places as the Zapatistas come to visit the indigenous and the workers of the Yucatan Peninsula. Stay tuned... 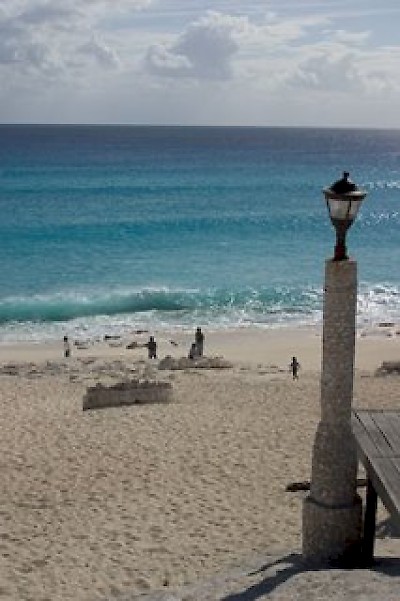 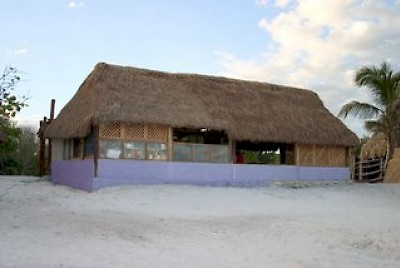 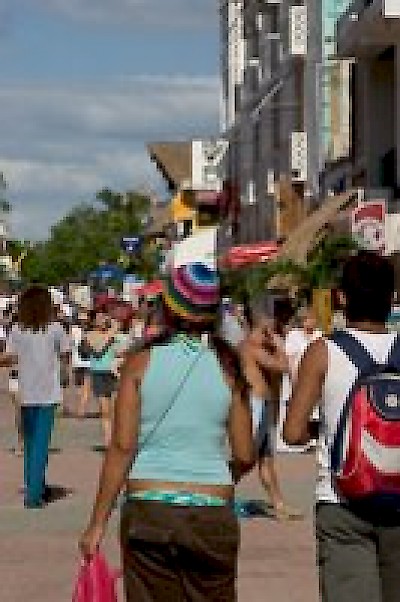 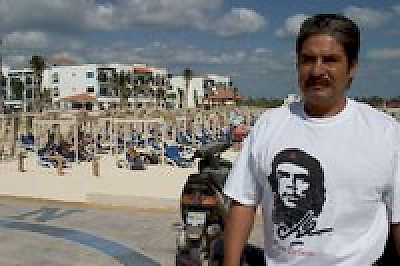 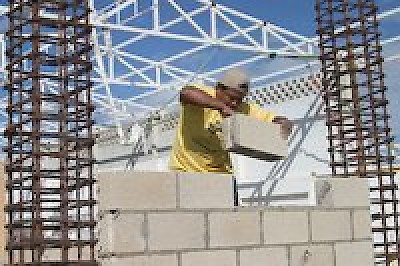