Yesterday, as the world was reading about Merida and the cheap real estate here (what? you haven't read the New York Times article yet?), some of us lucky residents decided to get out of Dodge for the day. It was a beautiful day for the beach and one of the multitude of benefits of living here is that the beach is not far away. So off we went!

And not just any beach, either. A wide, white sandy beach with no one telling you to put your dog on a leash. The dog is happy, the shells are plentiful, the water is warm and the sun is bright. Try walking two dogs without a leash on a beach in California, unless of course you own a house there. Even then you might have problems.

Of course, there's always a shadow, a cloud to every lining, so to speak. So it would be remiss of us not to mention that it's also a beach where you can find bugs the size of a pack of cigarettes. Thankfully, the bug we found was only moving feebly at the time of this photo. I would not want to meet this bug in a dark alley. It appeared to be some sort of flying cucaracha. Nice!

But we didn't let half-dead gigantic bugs mar our perfect day. Oh no! Not only was it a beautiful day at the beach, but it was a beautiful market day at the little town of Hunucma on the way back. The town was out in full Sunday market regalia, with beautiful be-hatted old men warming benches in the town square and young men putting the final touches on the temporary bull ring for la corrida later that day. The women were dressed in their cleanest huipiles and doing their Sunday shopping, the children were playing and the air was crystalline and clear under a cloud-spotted blue sky. What could possibly be added to make this a perfect picture?

Why, cochinita, of course! The best cochinita tacos on the Peninsula, at least that morning. This was the second time we'd eaten at the little house on the side street behind the mercado, and the owner recognized us. He serves cochinita at little plastic tables on his front porch, while his wife supplies the plastic dinnerware. He cooks his cochinita in the ground in his backyard every Saturday night to be served on Sundays. It's his own recipe with naranja dulce, he says, that is good for the stomach. I don't know how good it is for the stomach, but it sure is fine for the tastebuds! You just haven't lived until you've had a few cochinita tacos, dripping with naranja sauce, topped with a fresh habanero slice from the habanero just picked off the bush in front of you. And all washed down with genuine world-famous Mexican Coca-Cola! Now, that is Yucatan Living! 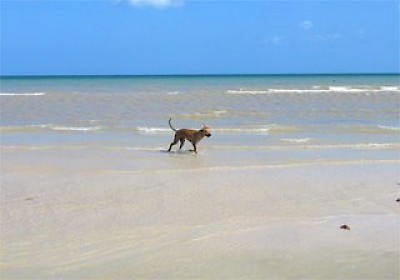 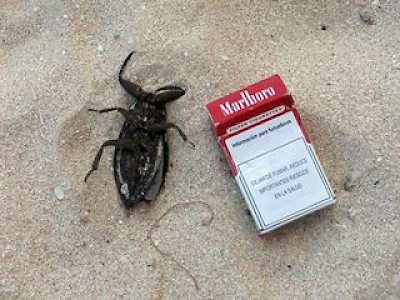 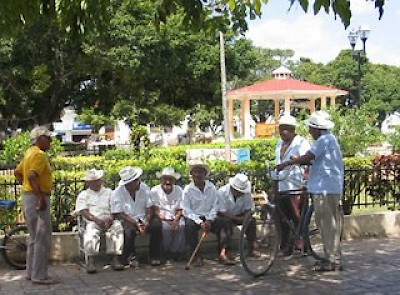