Hacienda Chichen is among the oldest structures built by Europeans in the New World and has long been an object of historical fascination for the Working Gringos.

In the early years of the 16th century, Francisco de Montejo explored the Yucatan Peninsula searching for gold. During his forays, he discovered that the sacred ceremonial site of Chichen Itza was still a pilgrimage destination for the Maya, so he constructed Hacienda Chichen, not only for personal shelter, but also as a Spanish monument to impress on the natives that new rulers were in charge. The Montejo family never found gold, nor did they long possess the land granted to them by the King of Spain. Over the centuries, the hacienda passed from family to family, used mostly as a cattle ranch when it was inhabited at all, since its distance from Merida and the lack of roads made it less than hospitable.

In the late 19th century, the U.S. consulate to Yucatan, Edward Thompson, became interested in the archaeological value of Chichen Itza and bought the entire property, along with the hacienda. It is said that his first task upon taking possession of the hacienda was to bury the remains of the previous owner, a victim of the Caste War. Thompson himself would lose the property to controversy after he revealed, in 1924, that he had been secreting Maya artifacts to the U.S. in his diplomatic pouch.

Archaeologists from the Carnegie Institute set up light housekeeping at the hacienda during their work on Chichen Itza, but the property was eventually sold to the Barbachano family. The patriarch, Fernando Barbachano, saw a new business opportunity and set about establishing a tourism industry in Yucatan, based on a revival of the Maya culture. He built the Mayaland resort, and eventually his daughter opened Hacienda Chichen for public lodging as well.

Fernando Barbachano’s granddaughter, Belisa, was living in the United States with her gringo husband, Bruce Gordon, when she learned that it was her turn to steward the legacy of Hacienda Chichen. We recently sat down with them to discuss the history of the hacienda, but more importantly, how things have changed since their arrival. What we’ve learned is that the vision of revitalizing the Maya culture and giving back to the local Maya community – ideals they share with both Belisa’s grandfather and father – are very much alive at Hacienda Chichen... 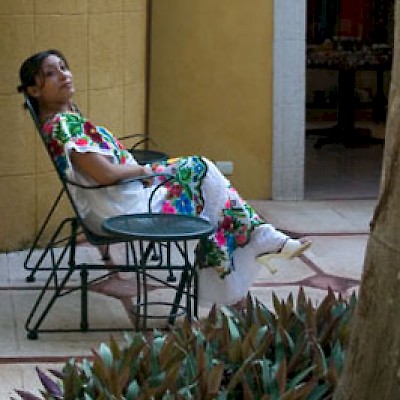