Art & Local Culture / Touch Me With Your Eyes Email & Share

Touch Me With Your Eyes

I was thinking that my client was extremely lucky when dying during his sleep after sharing his last night with his dearest friends. I was thinking that he was even more fortunate to have passed away almost at the end of a restful spa weekend in such a beautiful Hacienda resort half way to Campeche. I was thinking I would also like also to be caught by death right in the middle of the mystic Mayan region of the Puuc, where every place you turn your head there is a sacred temple. I was thinking what a blessing it must be to release your spirit in such a sacred land. I was thinking about the least painful steps to help his family return their beloved grandfather’s corpse back home to the USA, when I realized that I was lost not only in my thoughts but also in the middle of nowhere, somewhere in the Yucatan.

I know Puuc’s roads better than anyone. And I have driven that road so many times. I was angry at myself, and I had no time to lose. I must have missed the right turn. Then the jungle looked the same for about twenty minutes. The road also looked the same and I could not find any familiar landmarks to guide me. After about 20 kilometers without finding an intersection or a soul, I decided I was too far away to go back. This road must lead me somewhere!

With no time to spare and little gas, I was thankful that the jungle ceased its attack and let a humble stone fence appear as the road became narrower and poorer. Those stony albarradas let me see the little shy Mayan homes trying to hide from the road, placing themselves under the shadows of magnificent flamboyanes as if the trees needed to defend their fragile content. As if they regretted the existence of brief gaps in their stoned fences, they guarded the entrance marked by a drunken pathway crossing the front yard.

I drove past three rows of homes until I got to the middle of the main plaza in a small pueblo. I looked both ways, and my disappointment grew when I realized that I was the only human in the entire town. I circled the plaza, noticing a closed little church and a closed little comisaria . Not even a dog enjoying the shadows of a centrally-located tree seemed to care about me, and was the only witness to my visit. There was not even a rotten sign anywhere that I could see with the name of the town.

Aware of the time I was wasting, I drove out of the main square and found the only Mayan casita that I could see with an open door. Perhaps I could ask here for directions. I parked next to a spot where a family of baby turkeys has decided to cross the road. As I walked down the path and opened the humble Mayan gate, I entered a dark round room. I found no one except a handful of saints' images standing on tiny altars with barely shimmering candles. An impressive wood cross lay in the middle of the altar. I noticed that the stone paved walkway I had just walked on was better paved than the open dirt floor of this circular room. On the wall, hanging next to a ceiling of never-ending spider webs, was an ancient colorless photo of a Mayan family, posing and not smiling. The portrait is poorly framed with a wood similar to that of the cross officiating on the altar.

Thousands of fingerprints have left layers of dirt all around the frame. I assumed many hands had handled that photo after a hard day of work in the country. Despite the couple of desperate buenos dias that I cried out, I got no answer. There was a jar full of watermelon juice being attacked by hundreds of flies. I wondered to myself if what was floating on that watery surface were seeds or just some insects in disgrace. Finally I worked up the courage to trespass a little more, and I saw a woman at the farthest side of the patio. She did not respond to my greetings. With no other choice, I walked the fifteen steps between an obstacle course of flower pots that were encouraging the jungle to proceed. I stood right next to her, and she finally felt my presence. Her absolute attention was being paid to her craft. When she finally responded, I realized there was a magnificent wall with shelves, all stuffed with a myriad of colorful hammocks. The woman was imprisoned behind two wooden bars, linked by an intertwined wall of turquoise threads. She had a flat wooden needle in her hands that she was using nonstop to weave her prison even more.

When I recovered from the astonishment that I had found someone, I could not tell the reason why I was there. I could only say, “ Madam, Good Afternoon. How much are your hammocks?" With the sweetest 80-year-old voice, she answered “80 pesos”. I quickly tried to figure how to share my limited gas money with my impulse to buy a hammock. As I was choosing between oceans of colors, I asked the woman, “How can I get to Merida?” This time, her sweet voice gave me a bitter answer, “I do not know”. "What is the name of this town?" I continued my interrogation. She answered “Xcaloc”. Her words unfortunately meant nothing to me. So, I picked the most perfect hammock and I asked the size. For the first time since I had arrived, she stopped what she was doing. She moved her perfectly-woven silver hair away from her eyes and confessed to me that she was completely blind. She motioned to me with her hands to get closer so she could touch the hammock. A simple touch was enough to tell her the size. I asked her, “How can you tell between the colors?” She told me, "I have done this since I was a child”.

"Let me get the money from the car, " I answered as I walked out. I did not notice that she was following me out. She walked slowly, but with perfect awareness of her spaces. When I came back to her door, she was patiently waiting for me. I described the value of every coin and bill I gave her, hoping she would trust me. That seemed unimportant to her. Before I left, I had to ask, "Who are those people in the photo?" She said, “It is mom and dad, and me. When I could also see with my eyes.” 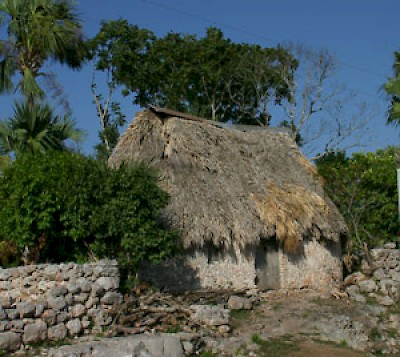 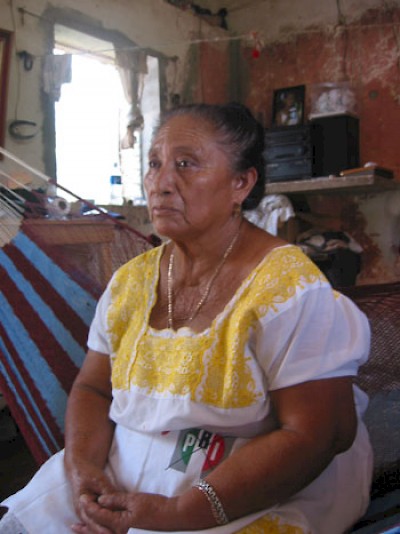