Princess of Yucatan: Prisoner of the Palanquin

Want to start this tale at the beginning? Click here to start with Chapter One.

Where a dusty path slanted wearisomely upward from the gorge of the stone pits and turned into a broader roadway that followed the walls of Chichen Itza, there sounded a tramp of burden bearers and a richly caparisoned palanquin came into view. Its gold-and-black hangings bore the crest of the Feathered Serpent, dread symbol of the Aztec priesthood. Four dusky Tamanes moved swifly at the litter poles. A torchbearer marched before, lighting the way through the quick-falling night of the tropics. Alongside strode a black-surpliced paba, one of the underlings from the temple Within the litter, in a limp huddle, lay a slight, fair-haired figure garbed in a rough masculine tunic. It was Nakah -- and about her clung the faint acrid odor of the heavy essence with which she had been drugged into helplessness to still her passionate resistance. Away from the hard labor of the quarries, she was being carried into the elaborate, ceremonial existence of the temple -- and death.

Soon the road that followed the curving of the walls emerged into a stately paved way and entered between a columned opening into Chichen Itza. The gay night life of the city had already begun. The Aztec officials who had residence here were thronging the wide torchlit streets. A swarm of gorgeously fringed and plumed litters, borne on the shoulders of lean swift runners, swept down the thoroughfare. Decked in garlands and parti-colored streamers, these conveyances were carrying guests to a gay rout at some nobleman's house.

Everywhere was movement, sound, excitement. From tower tops, night watchmen sonorously proclaimed the hour. The high-burning altar pyres of the temples poured forth the brilliance of their eternal fires and added to the illumination of the city. At this hour the pleasure taverns, with doors now opened wide to the street, saw their busiest time. Within these, jugglers did their turns; pretty painted girls seated cross-legged before little wooden drums, tapped soft accompanients to the songs they sang; other girls whirled in a maze of dance steps. In some taverns, games of chance, such as dice and totoloque, the latter played by hurling golden balls at a golden mark, and intensely popular now that it was in high favor at the emperor's court, entertained the patrons as they sipped chocolate, or wine of the cactus apple, or a heady brew of fermented honey.

In deep contrast to all this gaiety was the somber litter bearing the symbol of the snake, and accompanied by its stern silent escort. With no waste of time, this dark-robed group pushed its imperious way through the revelers, who stepped aside with something of awe to make passage for the temple palanquin. Here in Chichen the priesthood ruled more vengefully, and was more deeply feared, than the military law of the emperor himself.

As the palanquin progressed, it passed beyond pleasure place and palace, and on into the gloomy grandeur of the templed section of the city. Here a vast architectural complex of colonnades enclosed a many-acred central plaza composed of pyramid-temples, towers to the sun-god, sunken courts, terraces. This whole spacious group of religious buildings dated back into the glorious past when Chichen had been the holy city of the old Mayan empire. But, since the turn of the wheel of fate had brought Chichen under the heel of the foreign conqueror, these ancient buildings -- formerly dedicated to the peaceful rites of the Mayas -- were now remodeled into places of worship of the conqueror's terrible gods. Thaloc the Insatiable, and bloody Huitzilopochtli now ruled the altars within. To exteriors, the priesthood added weird sculptured adornments in honor of Kulkulcan, Feathered Serpent, the strangest god in all the dread host of the Aztec pantheon. On columns, balustrades and cornices were cut representations of the Feathered Serpent until his sinuous trail was set like a blight upon each of the one-time Mayan temples.

In the open court of the temple of Kulkulcan, the palanquin came to rest. Attendants lifted out the still insensible Nakah and, following the torchbearer and the paba, bore her up the wide deep steps between stone-carved serpent heads, fanged and feathered, and set with glittering jeweled eyes. Down a vast hall the little procession moved, footsteps echoing sepulchrally. At last, after innumerable turns and windings, the paba led the burden bearers through a doorway whose curtain fringed with tiny golden bells announced the entrance. WIthin this chamber, the receiving room of the House of Priests, Akahtabet himself, the high priest, black-browed, inscrutable, richly robed, sat waiting. Before him the men laid down their burden, then bowed low, palms to floor, and backed away.

The grim priest-leader bent forward from his throne-like seat and gazed long at the passive form at his feet. WIth that dire scrutiny a sensation of chilling peril seemed to pervade the room. The prisoner moaned and lifted a hand as if to ward off a blow. But the drug of forgetfulness still held sway and she did not waken.

"This one will do -- she is all that is desired," muttered Akahtabet. "She can serve us well as the Fair One of the Festival, the Bride of the Waters."

He rose to his feet.

"Up with her, bear her on into the dwelling place of the Temple Virgins."

Turning to the black-robed paba, he added, "See that she has proper attendants, that her education for the part she is to play is begun immediately."

Then as the paba, bowing deferentially, turned to go, Akahtabet halted him.

"Hold! One thing more! See to it that no weapon or missile of any kind comes to the victim's hands. We cannot have this one killing herself as that other did."

The next morning Nakah awakened out of her drugged stupor into a new existence. Wonderingly, she rose on an elbow to gaze about her. Instead of a slave's pallet of straw that she had known all her life, she now lay upon a soft couch. Her body, cleansed and perfumed, was wrapped in a robe all gold embroidered. Sandals bossed and laced in gold were bound to her feet. Armlets and anklets clanked softly at her movement. Beside the couch stood a tall, dark woman attendant, waving slowly a great plumed fan above its occupant.

Nakah sat suddenly upright and drew a hand across her eyes. This was some fantastic, beautiful dream she was living -- or was she living? She had a sensation of floating between heaven and earth.

Now the attendant laid aside the long-staffed tan, clapped her hands. The door of the apartment opened. Other serving women entered, some bearing garlands, some bearing golden platters heaped high with meats and pastries, goblets of foaming froth of chocolate, baskets of fruit. In a daze, this child of the bond people tasted delightedly one after another of the rich dishes, rolled the sweet, unknown morsels on her tongue, listened to the soft flutings of musicians who had now entered.

Then with the full return of her normal senses came the horror-realization of what all this meant -- what was signified by this serving her as a princess, a goddess. Things that blind Copan had told her, mysterious whisperings that she had picked up at the slave camp -- these staled through her mind in terrifying procession.

She was being treated as a goddess by these temple servants, only in some rite to be feted as a representative of the gods, then sent to death -- a sacrifice!

Editor's Note: This is the continuation of a series that is a serialized reprinting of a novel that we found on eBay: Princess of Yucatan by Alice Alison Lide, published in 1939 by Longman's, Green and Company out of New York and Toronto. The book was obviously researched heavily, as there are numerous (and interesting) references to Mayan lifestyles, locations and spirituality. Original drawings are included, which are attributed to Carlos Sanchez M. You can start at the beginning here. 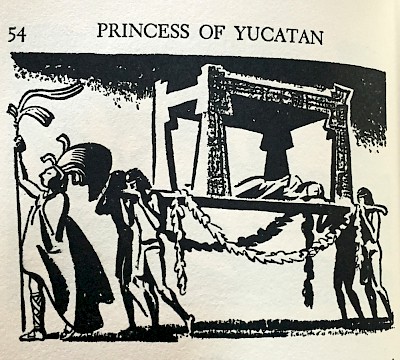 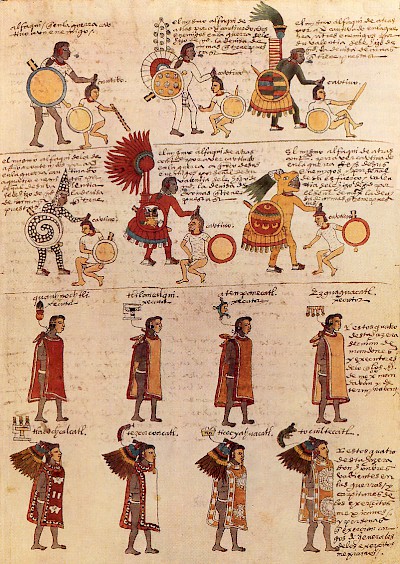 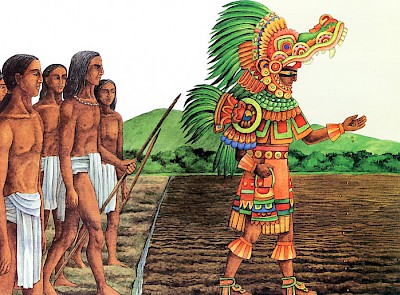 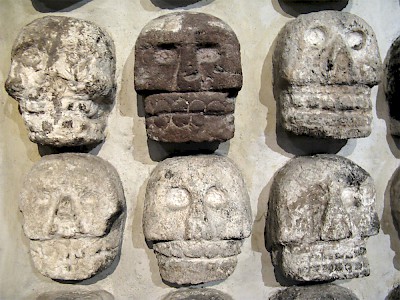 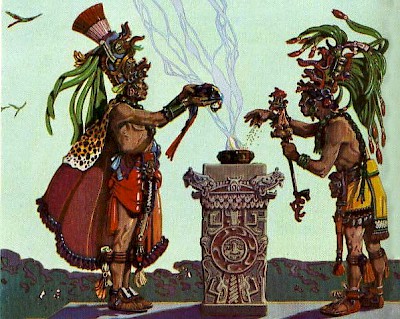 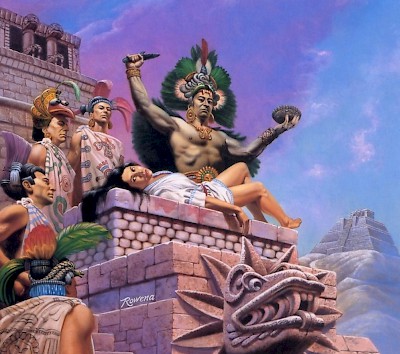 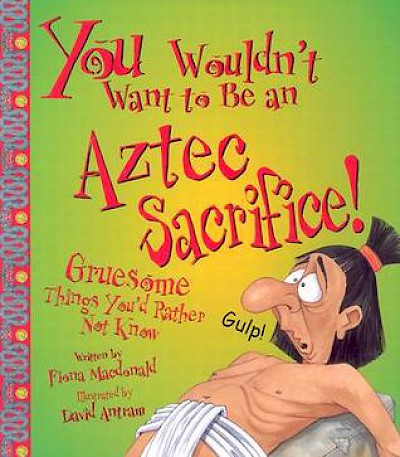