Princess of Yucatan: Power of the Signet, Part II

For a moment the governor stood speechless. In the next, he leaped forward, took the slave's hard hands into his own, bent reverently before him.

"You!" cried the bewildered cacique. "You! Yes, my own eyes cannot deceive me. It can be none other than Copan Xib Chac, the long-lost foster son of old Queen Thermatl, mother of our emperor!"

Hunnac Cuit spoke the truth. Copan, now the blind quarry slave, had lived a life of unparalleled contrasts. More than half a century ago, after one of the recurrent provincial rebellions, he had been found beyond the walled city, a lusty infant crying beside his dead parents. Beneath his fine little garments of softest pita webbing, he had worn about his neck on a cord a jeweled set with a royal chalchuite stone and inscirbed with the Mayan kingly symbol.

Down into the Vale of Anahuac he had been carried with other plunder captured by the punitive expedition. Because of his virile beauty and undoubted royal blood, he had been adopted by the good Queen Thermatl and reared as one of her own children. In his youth, and in the youth of Hunnac Cuit, nephew of the king, the two had been boyhood comrades. First, at the old royal palace with its gardens, armory, aviary and rare menagerie, they had played childish games among the pools and fountains and wondrous gaudy flowers. Later, in the warrior school, the two royal striplings had learned the fierce arts of bow and sling and maquahuitl in preparation for great deeds to come.

But to what far poles of existence had the two friends' lives dropped apart! Hunnac, through one achievement after another, had risen to governorhood, was ruling king of a province. And Copan Xib Chac was a blind slave of the stone pits!

"But you -- you with your wit and wisdom, could have been prime courtier of the palace, could have held forever a place in the king's train. Why did you mysteriously disappear from it all and -- and drop to this?"

"When I came of age I learned who I really was. The ancient Akab'tzib, the Itzan astronomer, who in the long ago, before the downfall of our house, read the stars from my own father's palace tower, was, as you know, carried away into captivity into Anahuac. He was made to serve his conquerors, and teach his science to Aztec youth in the temple school. But his mind ever dwelt in the past. He told me of lost glories, he prophesied mahy things to me -- and he told me how my tribe had become a bond-people.

"As I pondered these things, I could no longer laugh and frivol in the ease of the palace life. My heart would not let me eat of the bread of idleness while my people lived in the horrors of slavery. So Anahuac knew me no more, and secretly I came to my own. It has been my life hope to lift Itza from her bondage."

"In the Aztec code, is it not written that slaves may buy their freedom?"

"It is the law -- yes," answered the governor, "but my friend, the Itzan tribesmen are as the sands of the sea for numbers! It would take a thousand thousand quills of gold to buy their freedom! How can you, a quarry slave, ever hope for such? Now, had you stayed on at the court of the emperor and kept your hold upon his favor, you might have secured the freedom of some few of your fellows -- your nearest of kin, perchance -- "

"No, wait!" cried Copan, fumbling in the leather bag at his girdle, and drawing forth the broken tablet. "Look upon this. Can you read it?"

"This -- an inscription? I see naught but a meaningless jumble -- "

"So it would seem to you -- to anyone. It is ancient Mayan writing. In these days, my grandchild Nakah and myself, we alone can read it. On this piece of stone is cut the list of the treasure of the hidden Monjas of the holy men of Itzan. Hereon are noted golden nuggets, bars of silver, a xicara of uncut turquoises, ten xicaras of emeralds, diamonds, jade -- treasure enough to buy the freedom of my tribesmen twice over.

"In my youth in the Vale of Anahuac, the ancient Akab'tzib told me of this. Later, so did Kakama, the last of the Mayan prophets. Both of these belonged to the priestly order. To them was known what was revealed only to the initiate -- that for centuries, part of the yearly offerings paid into the temple coffers of Itza were carried to a far shrine in a secret Monjas set on the top of a mountain. In accordance with an old prophecy, this tribute of treasure was paid into the earth-god's keeping till that time when Itza should need it most.

"The time of cruel need has been upon our tribe for a century of suffering. But in the calamities of war, and the desolation of our empire, the sacred tablet bearing the list, the routes, the map, was lost -- never to be found again, it seemed. Men have despaired or forgotten the prophecies of old. Only a faithful few have kept the search throughout the ruins of the jungle-covered cities of the Old Empire.

"Many a tablet have they brought to my hand -- and, at last, the right one. On this bit of stone are graven directions to cover the first lap of the secret route which leads to the Monjas. At ancient Mayapan, now a wilderness, lies another stone which will guide us farther. Thus, only he who reads and understands the old Mayan sacred glyphs can ever locate the wondrous treasure, the turquoise, the jade, the lost emeralds."

"A xicara of turquoises, ten xicaras of emeralds," repeated Hunnac Cuit after him; "gold, silver, jade! 'Twill be more than conquering a province to purvey such wealth to the emperor's coffers!"

"You will write me the order, then, for an armed guard, pack carriers, equipment?"

To his friend, now a governor, turned the slave of the quarry pits.

Hunnac clapped his hands for a parchment, inks, brush.

"Xicaras of emeralds, turquoises!" he kept mumbling dazedly under his breath.

Writing materials in hand, he motioned for the attendant to leave him. Long the two men sat, drafting, planning, arranging in its details this strange expedition that would bring certain glory to a provincial governor; that would open a way of freedom to a people in bondage. As Hunnac Cuit signed the parchment he leaned close to Copan.

"I warn you, " he muttered, "keep this undertaking most secret. The Aztec priesthood here in Chichen Itza, under Akahtabet, their leader, rival the emperor himself for power. They are a law unto themselves and obey no one, and they may hinder your enterprise. The priesthood craves not the freedom of the bond-people. They plan great temples and pyramids with slave labor in the quarries. Now, farewell -- and the blessings of both our gods be upon you."

In a daze of joy, Copan marched back to the ugly camp of the stone pits. It was nightfall when he arrived, and the camp was setting its weary self to the further labor of preparing the scanty evening meal. Little columns of blue smoke rose upward between the huts. A thumping of stone mills told of the grinding of the maize. But a greater unrest and misery than usual seemed to brood upon the slaves. There was no drift of conversation from group to group gathered at the fires.

As soon as the two soldier guards, whom Tihua had sent with Copan, left him before his own wretched hut and had taken their departure into the night, a few ragged Itzans drew close to the blind man. Their faces were heavy with affliction.

"On this day came a swift litter that had the temple sign on its crest. She was thrust into it and borne away. Some that labored at the haul ropes with her strove to save her, but knouts and blows overcame them --"

"And woe upon her," broke in another. "The palanquin bearers told some that the priestesses had long known this Nakah to be a girl, and had kept an eye upon her. The maiden already chosen to represent the temple goddess of spring had in most unseemly fashion killed herself. So, to take her place, a fair one was needed --"

"That one is sent to death in the Cenote of Sacrifice!" 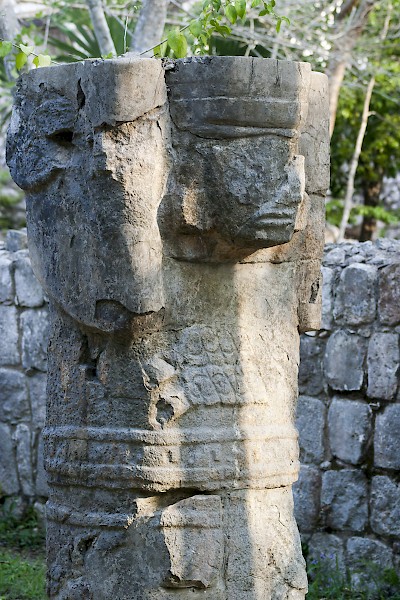 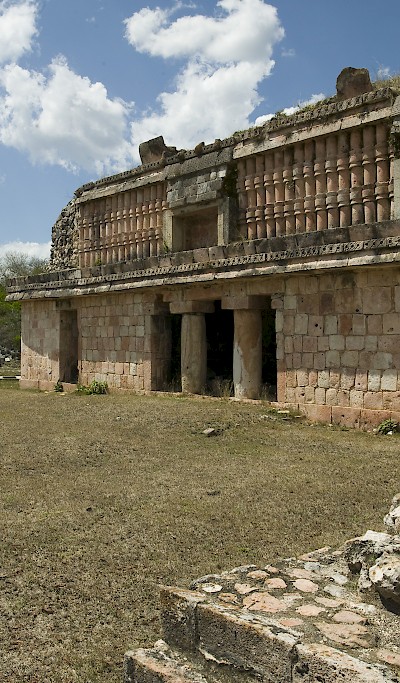 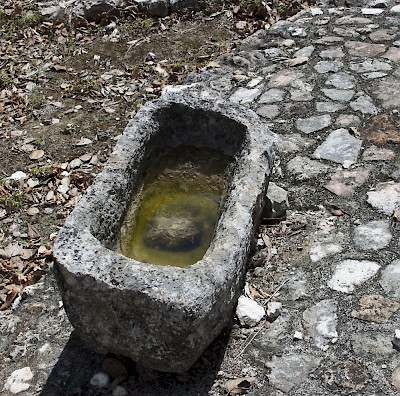 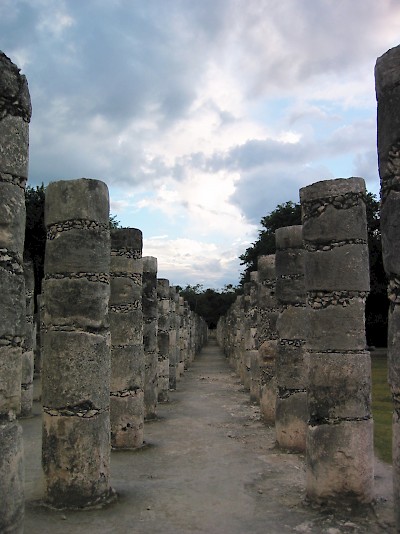 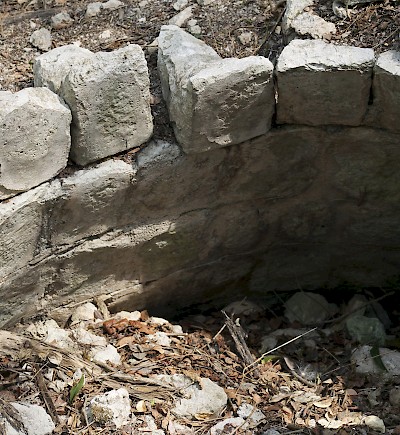 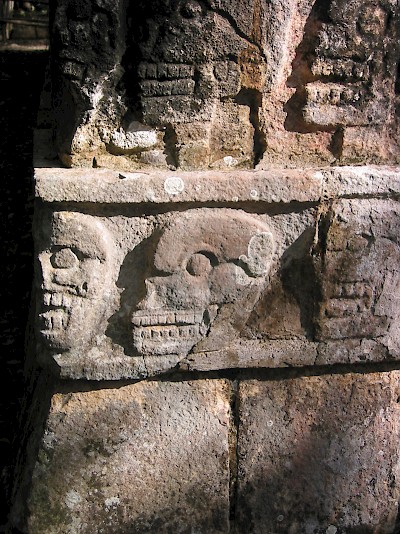