Dawn of a day found the Itzans wandering again, and with no more to guide them than they had had for weary months in the past. If only they could find some mark or sign to set their feet toward the river fo the Winding Snake!

There was nothing more they could do, though, than seek, seek, and face the dangers as they came. Their wanderings took them westward and southward, now through low-lying swamp lands, now through forests where the chechem trees dropped poisoned dew on all who slept beneath their shade -- a dew that brought on swelling, itching, and sores that were hard to heal. At other time their feet led them across stony desert places where grew the stunted, thorny tzubin bushes and strange pithy plants called taje that shook off a yellow dust that brought on terrible sneezing and weeping of the eyes.

The little band of wanderers made far circuits to avoid all contact with places inhabited by men, for they had no strength to be wasted in battle with the savage tribes that occupied these lands beyond civilized bounds. Sometimes, though, they approached a jungle habitation almost before they knew it.

Once in the stifling heat of midday travel, as the panting Nakah parted the brush for a forward stp, she leaped back with an exclamation of amazement at what she saw before her. There in a wilderness clearing was set a village of tiny huts, neat brush-and-wattle affairs scarce five feet in height. In the open space before the dwellings were some small crude earthen pots, gourd jars, little foot-long cradles of bark, and a group of naked black toddlers that looked more like toys than children.

Even as the Itzans stood gazing in wonder, a troop of dark, big-headed little pygmy mothers burst through the brush, scattering implements of toil as they ran -- sharpened stick diggers, gourds of fresh roots and nuts -- and seizing their offspring, fled away into the jungle, emitting shrill wailings of rage and fear.

"Hist you --- fly!" raspec Calcingo to his Itzans.
"The Bulongo - the pygmy cannibals of the poisoned darts! The women will have set their men upon us in the space of ten breaths."

And fly the Itzans did! A blindly desperate flight into they knew not what, seeking only to leave behind the blood-lusting, misshapen tribe they had stumbled upon. Soon the wilderness reverberated to the dull whine of beaten wood drums. Shrill animal-like calls that made the flesh creep pursued them nearer and nearer. Suddenly there burst into view a horde of dark, pygmy monkey-men, swinging themselves swiftly along through the treetop thoroughfare of matted bough and vine. Great wooden bows, twice the length of these three- and four-foot warrior savages, swung from each dusky form. With a weirdly nimble use of toes as well as hands, the pygmies loosed a hissing flight of darts.

The man who was roped to blind Copan fell with a poisoned arrow through his shoulder and writhed into instant horrible death. WIth a quick slash of her maquahuitl, Nakah freed old Copan from his dead guide, and with Calcingo to help, the two of them rushed their leader onward in the mad flight. Other victims fell to the deadly arrows.

Then came a saving stretch of open country across which the remnant of the Itzan party outdistanced their pursuers and gained the shelter of a deep gulch. Here, in this narrow canyon was refuge of a sort. Its sides overhung somewhat, with flood-washed caves here and there. The far end closed to a mere earth crack. WIth a stone rolled against the entrance of the gulch, it served as a fortress. But the Itzans faced the cruel fact that their refuge was likely to prove a deathtrap. Beseiged in this dry gulch, without food and water, it could be but a matter of time before they must fall prey to the lurking little jungle demons without.

But with all the stoicism of their race, the Itzans prepared to await the end and sell their lives as dearly as possible. Further stone embankments were added to their barrier, a watch was set, and the others crawled back into the earthen caves to gain what strength they could from a hunger-and-thirst-tortured sleep. Out on the jungle edge, tiny fires gleamed redly, and the steady, triumphant boom-a-boom of tom-toms told that the savages were drawing in for their victory.

A high pale moon arose in the sky and illuminated the jungle world in ghostly white light. And suddenly strange things began to happen.

Above the wooden whine of the tom-toms, another sound arose -- a rumbling, faraway roar that was part animal cries, part thudding of many hoofs.

Then from the forest bust a great fleeing animal host, a strangely mixed army in retreat, where hunter and hunted pressed agonizingly onward, side by side. Came a host of deer and slinking wolf forms, snorting cow buffaloes with wobbly calves in tow, and the cat kind -- ocelot and spotted civet and tawny puma -- great snakes in pairs, armored alligators of the swamps, and, noisy above all things, a bedlam of howling monkeys!

Pygmy drums hushed. Pygmy forms fled with the fleeing animals. Then, out of the wilderness came the chief of jungle terrors, that white death which is the army ant on the march. On and on, poured the seething awful mass, a hundred yards wide and miles long -- millions of savage insects that devoured every living thing in their path of march. Now and again the forest resounded to the screams of bird or animal, vine-snared in reach of the white death. But to the Itzans in their gulch, set beyond the line of march, this river of white death was a salvation. It was as though the ancient gods of Maya had sent this jungle creation flowing out between them and their enemies.

Forgetful of aching weariness of over-strained limbs, Copan's party thankfully dragged themselves out of the gully deathtrap, and fled away into the moonlit forest. For a few hours the white army would march between them and their pursuers. And in that time, for life's sake, they must travel far.

Fighting, hacking, tearing out a trail, blind Copan's men forced their way onward, hurrying him in their midst. Once a far-stretching lake interposed itself in their way. There was no time for raft-building, no time for making a long circuitous detour. So, though a water boa slid into the depths before them, and though great alligators wallowed in the shore mud, Calcingo, wading in, led the party fearlessly forward into the very midst of these dreaded aquatic monsters. As his only protection, Calcingo beat together in his hands held below water a pair of stones. Behind him marched his tribesmen, each one pounding his pair of stones till the waters reverberated moaningly to this strange, quavery boom-a-boom. The huge, horny armored alligators slunk away from this noise-protected man procession, and in safety the Itzans clambered out on the far bank.

The River of the Winding Snake

For a few more miles, they labored forward; then exhaustion claimed them. Into tree crotch or crudely piled vine shelter they crept, and slept for twenty hours of sheer weariness. Yet another day they loitered where they were, seeking food and healing herbs for their jungle-torn bodies. The third day they pushed forward again and at noontime came to the shores of a great river -- a greater river than any of Itza had ever dreamed of. Between deep banks the sullen waters surged forward in a mighty curve.

This -- this must indeed be the great river of the Winding Snake!

The Bulongo pygmy tribe... in Africa. Not sure how they made it to the jungles of Yucatan!

About the chechen tree.

What's a maquahuitl, you ask? Find out here.

The river of the Winding Snake is probably the Usumacinta River. 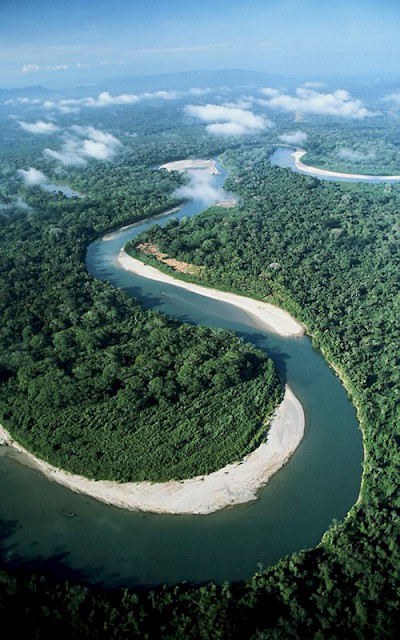 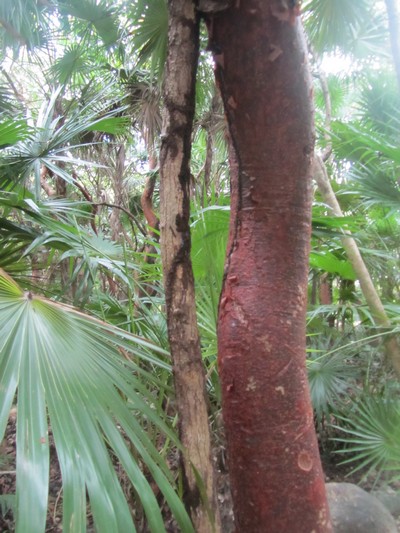 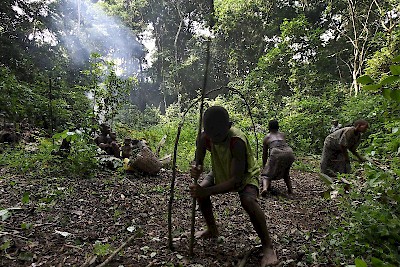 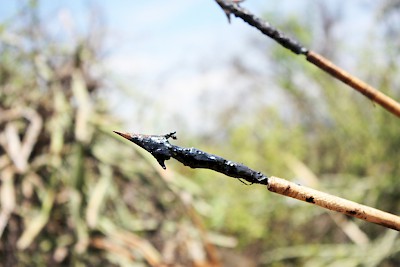 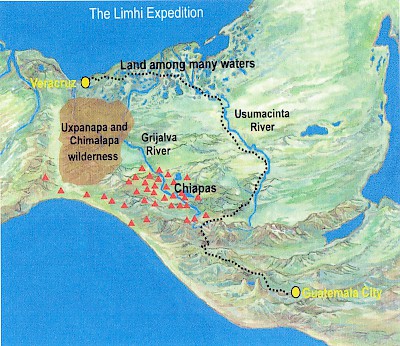 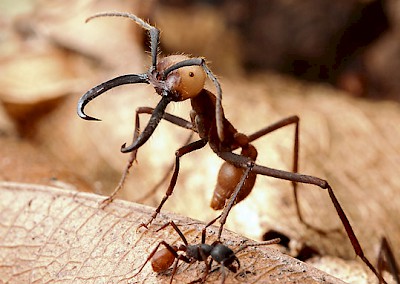 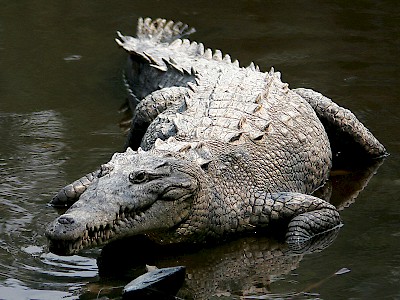 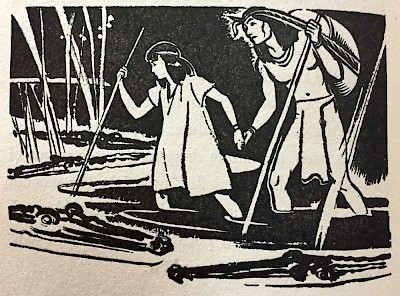 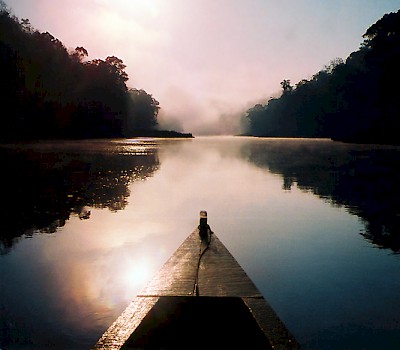