This is a fictionalized autobiography, written in Spanish, about a fascinating man who has been called the Yucateco of Yucatecos: Justo Sierra O'Reilly.

His statue stands in Mérida at the round-about where Avenidas Colón and Pérez Ponce cross the Paseo de Montejo--with his back to the Walmart store (read into that what you wish). Justo was an illegitimate son of a priest and his ama de llaves (housekeeper), the daughter of Irish immigrants. Consequently, he bears his mother's family name but not his father's. Despite this less than auspicious start, he married a daughter of Santiago Mendez, a man who was twice the governor of Yucatan.

Justo Sierra became an important actor during his moment in history and, many say he is Yucatan's best known writer. He is one of those people who managed to do a great deal in a short lifetime. And though his life was a great success in many ways, his death at the age of 47 was tragic. He died of leprosy, as did his father. As his affliction became more visible, he separated himself from his family and lived his final months in the Convento de La Mejorada, a 17th century Franciscan convent that is now restored and is the home of the Facultad de Arquitectura of the Universidad Autónoma de Yucatán (FAUADY) on the east side of the Parque Mejorada.

Most of this fictionalized account of his story is told through Paoli Bolio's creation of an imagined Justo, writing in the first person from his self-imposed quarantine in the convent to his beloved wife, Conchita. He is writing in order, as he says in the first sentence of this novel, "to make my life clear" (poner en claro mi vida). What follows is a history of the Yucatan Peninsula from colonial times up to the first decades of the 20th century, a history that becomes intimate and detailed when witnessed by Justo during the middle years of the 19th century. A lot happened here in the Yucatan in those years... Yucatan history is fascinating. Justo was a young man during the War of Independence from Spain and deeply involved, via his father-in-law and his journalistic profession, in the politics of the time leading up to and well into the very destructive Caste War that took place in the Yucatan Peninsula.

Some of the historical personages in this work are familiar to anyone who has read the last book that I reviewed, Península, Península by Lara Zavala. Among them are Santiago Méndez and Manuel Barbachano, the two men who dominated the acrimonious and divisive politics of the Yucatan in the 19th century. There is also José Turrisa, who appears repeatedly as a prominent character in Lara Zavala's novel and is, in fact, Justo Sierra O'Reilly, who used "José Turrisa" as a pen name.

In Las Guerras de Justo, there are chapters describing the lives and thinking of the Mayan rebel leaders Cecilio Chi and Jacinto Pat. These alternate with chapters continuing the memoirs of Sierra O'Reilly. Especially intriguing is the chapter on the mestizo José María Barrera, creator of the cruz parlante (the talking cross) and the last Mayan rebel stronghold of Chan Santa Cruz. Again in this novel we have history through the eyes of historical characters created by the imagination (and research) of a contemporary and skilled author.

This is a novel for a person who is comfortable reading in Spanish and is an aficionado of the fascinating history of Yucatan. But be forewarned, there is more history here than story. It is clear that the author did considerable research on the events of the time and on the life of Justo Sierra O'Reilly. As a result, the book is sometimes more detailed than what might be desired by a reader looking for simple entertainment. Several chapters are devoted to his mission to Washington, D.C., which Justo undertook at his father-in-law's desperate request to attempt to get the United States to help in the war against the Mayans. Justo's father wanted recognition of Yucatan's neutrality in the Mexican-American War and wanted Yucatan to become a territory of the United States (in effect, another American state). Fortunately or unfortunately, depending on your point of view, Justo's mission failed and so did the rebellion of the Mayans. The memoirs paint a critical but balanced view, neither positive nor negative, of American politics and politicians of that time.

What have I learned from this novel? In the first place, I have gained an understanding of a man who is unique and clearly very special in the history and cultural development of the Yucatan. The interesting question is why this man was and is so important to the people of Merida and Yucatan... so important that they would erect his statue in what can arguably be called one of Merida's most important crossroads. He was, after all, an illegitimate child, a writer and occasional political activist. He was sent to Washington to offer Yucatan as a territory of the United States, something that never happened. All he seemed to have was the power of his pen and a close connection to an important political figure. On top of it all, he died young, of an offensive disease. So why does he have a statue dedicated to him in one of the most visible places in Merida? If you can answer that question, maybe you will have understood something essential about what it means to be Yucatecan. Or perhaps he was somehow important to the people building that intersection at the time... which would itself be an interesting footnote in his history.

The novel describes in some detail the tumultuous and sometimes violent politics in Yucatan during the 19th and early 20th centuries. Much of the antagonism underlying those conflicts were cleverly defused by President Juarez, who divided the Yucatan into three states: Campeche for the Campechanos, Yucatan for the Meridanos, and Quitana Roo for the Mayas. I have also learned more about why the Mayan people rebelled in such a violent way. They were not just attacked, occupied and oppressed for 300 years. They were a proud people with a long and admirable culture who were disdained, humiliated, enslaved, and severely abused by their European conquerors. In his memoirs, Justo concludes that the Mayan defense of their homeland against the Spanish invasion had never ended. In his conclusion, he concludes that the so-called Caste War had been going on, at differing levels of intensity, for centuries.

In the last years of his life Justo and his family lived in a house at the esquina de la Culebra (Calle 59 at 56), corners now occupied by modern buildings and businesses. His wake was held there, and he is buried in the Panteón Civil (the public cemetery) of Merida.

With the caveats that initiate the beginning of this report, that the book is more history than story, I can recommend Las Guerras de Justo highly for anyone interested in this fascinating, complex, turbulent and dangerous time on this now (thankfully) tranquil Yucatan Peninsula. 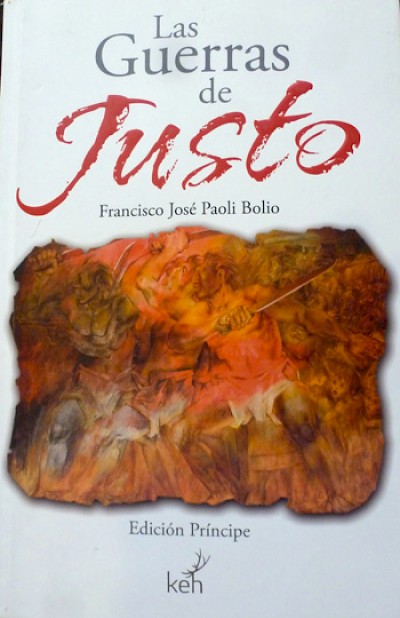