The Education of a Young American

A young boy is born an artist in Racine, Wisconsin, a place of innocence during a time of American greatness. As he comes to consciousness, a great war has been won and prosperity grows around him. He is surrounded by the people of the heartland... farmers, housewives, workers. He lives on his father's milk farm with two brothers and a sister, milking and breeding cows. He clashes with his father, but gets along great with his mother, who always takes him to town when she goes, and leaves him on the pier to fish while she runs her errands. His life is filled with fish, foxes, skunks, raccoons, geese, chickens, pigs, cows and horses, and his days are spent close to the earth, to animals, to nature. He becomes an Eagle Scout. He dances to Rock Around The Clock.

The family is Catholic and the boy goes to church, where he perhaps has his first encounter with art. On the walls of the church, one man hangs from nails in his hands, his head surrounded with thorns, blood dripping. Another man stands, pierced from head to toe by arrows. One can imagine that his imagination is pierced by what he sees.

To please his parents and their expectations, he graduates high school and attends the University of Wisconsin to learn agriculture. Once there, he switches to the study of art and art history, and studies with Leo Steppat and Harvey Littleton. He helps Dale Chihuly build a glass kiln, though he decides not to work in glass. One summer, he studies for six weeks with Frank Lloyd Wright at his studio in Spring Green. He walks across the mall on campus with John F. Kennedy, who had just published Profiles in Courage. Eventually, he finds his way to the Chicago Art Institute, where he recieves a master's degree.

The Creation of Joseph Kurhajec

In 1961 in Chicago, he sees an exhibit of fetishes from the Congo in Africa. His entire being is invaded by the raw beauty and dark magic of these African sculptural beings. A few centuries after Europe colonizes the heart of Africa, the heartland within Joseph Kurajec is colonized by this powerful African art... and to this day, he continues to explore the boundaries and integrations of these two opposite sensibilities while he continues to collect authentic Congo fetishes, also called nkisi or nail fetishes.

Because it is the center of art in the Sixties, after graduation Joseph moves to New York City and lives where his car breaks down, on First Avenue at Ninth Street. He sees Bob Dylan play in the Village. He rubs elbows with the likes of Andy Warhol, Frank Stella and other popular artists who are creating the zeitgeist of the times, the art that we know today as pop art. His art is labeled Art Brut, and he is seen as an "independent" artist, an outsider. His art is shown at the Guggenheim with ten other "independent" artists, including Red Grooms, Nancy Grossman and H.C. Westermann.

Eventually, Joseph moves to upstate New York and explores Paris. He marries, has a child. He teaches as a guest artist at Cornell University. He continues to make art... and today, has been making art every day for over fifty years.

The Art of Joseph Kurhajec

To find out more, we visit the man himself in his Merida studio. Behind the faded colonial facade on Calle 60, south of the Plaza Grande, we find Joseph in his home, his studio and his gallery... one a bit indistinguishable from the next. The floors of faded pasta tiles and the walls stained with years of humidity provide a fitting backdrop to the art that inhabits every nook, cranny, vertical and horizontal space. Sculptures cluster on tables and pedestals in the first room. There, sculptures include found stones, carved stones, carved clay, sculpted clay, wood with feathers and found wood pieces. On the walls, paintings of Christ and other icons mix with skulls and masks created from found objects.

Another room is filled with large black pots, adorned with clay lizards, turtles and other animals. On the wall are black and white paintings of fish and other sea creatures copied from the drawings found on the Easter Island heads. More fish paintings. And his latest works stand up against the table... multiple poses of Christ, a Picasso-styled woman, and a Posada-style scene are printed on found tapestry samples, overpainted with bright highlights resembling blood or light or wounds or maybe all three. These latest works recall Picasso, Posada AND Warhol, while still being uniquely Kurhajec.

In the kitchen, the center of the house, a wooden kitchen table holds papers, food, pots and an energetic kitten. In the center, a group of sculptures that recall the Venus of Willendorf cluster nakedly on tiny pedestals, facing in all directions. We sit in the kitchen talking, but concentration proves difficult because the walls there are filled with art that Joseph has been collecting here in Mexico. Above one door is a drop-dead mask collection he tells us he found on the street one day when someone was throwing them away. These are vintage masks from around Mexico in fairly pristine condition, whose colors and primitive features seem right at home here. Another wall is filled with crucifixes, something there is no shortage of here in this Catholic country. Joseph's crucifix collection actually spreads to other parts of the house, and ranges from very traditional vintage versions to his almost modern crucifixes created from found branches.

In Joseph's bedroom, the collection turns to the religious. On the dresser are portraits and busts of Christ, Mary and various Venuses congregated together with woven palm fronds, all under the watchful eye of Mary Magdelene and one of Joseph's own bleeding hearts painted on black velvet.

Outside, Joseph's working studio spans the entire length of the building, half under the open sky. Here are piles of carefully chosen rocks, some waiting to be carved and some already carved by time and just waiting to be presented. Everywhere, hidden between stones, piled on shelves and stuffed in boxes are pottery skulls. Inside the studio extends towards the front of the house. In the kiln on this day, we find three Virgins of Guadalupe. These are Joseph-style Virgins, whose faces are not beautiful and whose lines are not fine. When we return a few days later, these Virgins are adorned with white paint, surrounded by gold-painted flames and the faces are still rough, ancient and evoke both pain and wisdom. The horns of the moon on which she stands look a lot more like horns of an animal. This Virgen is powerful, magical and more discomfiting than comforting.

Which is, we discover, what Joseph's art evokes in us more than anything. These sculptures are indeed fetishes, projecting power and protection. They do not attempt to create feelings of safety or peace. They will not soothe or soften reality, nor will they encourage denial or blindness. Rather they create disturbance, reflecting a reality that many of us would rather not see. In doing so, they touch us in a deep and hidden place. They corroborate. They listen. They pulse and beat like hearts and drums. They reflect and reimagine. They remind and reiterate. And in doing so, they heal.

Today, in 2015, Joseph has lost 98 percent of his friends. He continues to make his living as an artist, and his art continues to sustain him. His works live in a shamanic space, pulling hope and understanding from clay and stone. His fifty five years of constant creation are the research and discoveries of a man on a quest, a man hoping to penetrate the mysteries of our humanity.

We first heard of Joseph Kurhajec a few years ago, when he first established his studio in Merida. His arrival was announced by posters... lovely, somewhat primitive woodcuts of a fish announcing the Museum of Fine Art of Joseph Kurhajec. "Curious...", we thought. But events conspired to keep us from investigating further.

Fast forward a few years, and now Joseph has an established pattern. We are happy to have "discovered" him. He spends summers at his home in upstate New York (the Museum of Fine Art of Joseph Kurhajec in Treadwell, New York), spring and fall at his home in Paris and winters in Merida... not a bad life for someone who, by his own admission, never "made it" in the art world of New York City.

Galeria Merida has established a permanent home for his installations, the first of which featured a strong anti-war message with, among other things, skulls mounted on pottery bombshells. In early 2015, Joseph has both his permanent space in Galeria Merida with a new exhibit of powerful stone, bone and pottery fetishes, and a temporary exhibition at Galeria Esakalera in Santiago.

Both chance and luck brought Joseph to Merida years ago. We hope and predict that Joseph and his powerful work will grace the galleries, halls and homes of Merida for years to come. 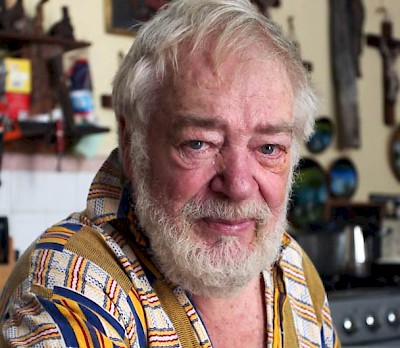 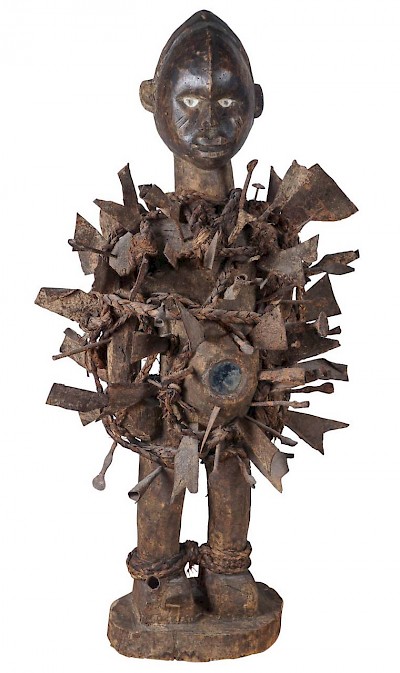 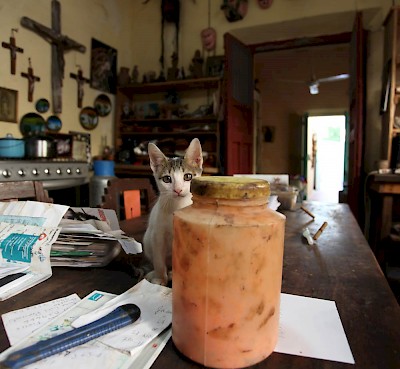 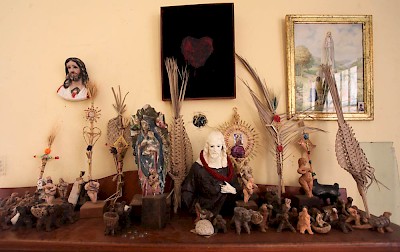 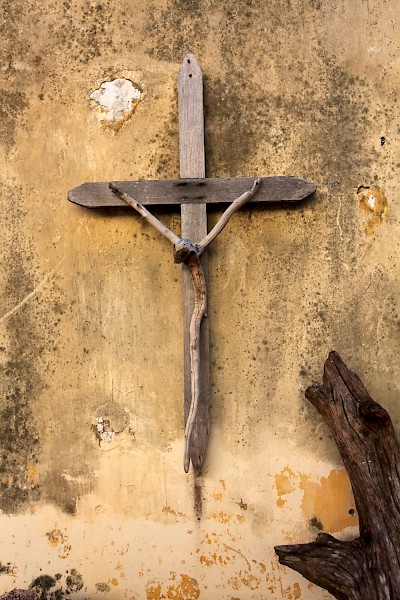 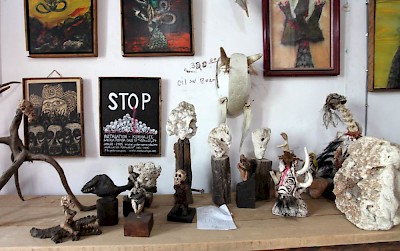 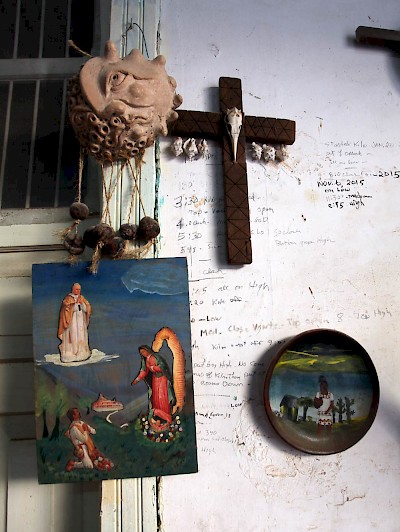 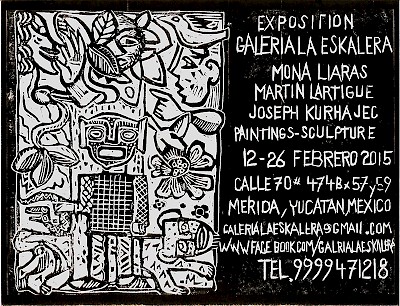