Editor's note: The following is an excerpt from The Man Who Owned a Wonder of the World written by Evan J. Albright. The book is an investigation into how Chichén Itzá became one of the most famous archaeological sites in the world. The author explained to us that during the editing process, many interesting, but in the end irrelevant, bits of history got cut or reduced. We asked Evan if he might share some of this interesting Yucatan history with our readers, and this is the result... Part One of a three part series. You might consider this the "director's cut" of the book, and this part features the true story of the discovery and excavation of the Balankanché cavern, less than two miles away from the center of Chichén. If you are just catching up, you can read Part I here

Balankanché, the Throne of the Jaguar

“Being 23 years of age at that time, the world was so small for me,” he said. “There is no fear, there is nothing. Curiosity, yes, a lot. I wanted to see what was behind the wall. So I kept removing the stones, material, stones, material, and I opened up a hole that was big enough for me to crawl through.”

Humberto managed to wriggle his thin, wiry frame through the narrow opening and up an incline into a chamber. He played the light of his flashlight along the walls, but it only could penetrate the gloom a meter or so ahead.

“It was like having a blanket in front of me,” he said.

He went down several passages that appeared to be dead ends, but found one that appeared to go for quite a distance. He came to another small incline, and could make out a large structure ahead of him.

“I happened to find myself in front of an enormous stalactite and stalagmite, fused together to make a giant column. I started going around it very carefully.”

It turned out to be two stalactites, and when he played his light between them he found a large vase in the shape of an hourglass. Half was painted red, half was painted blue.

“And there was the Maya rain god staring at me and I was staring at the rain god, face to face.”

Humberto backed away, and as he did, he shined his flashlight on the ground. He discovered to his horror that he had somehow stepped into an archaeological minefield. Surrounding his feet, in every direction, were dozens, if not hundreds of Maya artifacts: incense urns of every shape and size, many with faces carved into the sides, as well as a wide assortment of metates, the grinding stones the Maya used to prepare maize. If his path had veered by only a foot or two, he would have knocked over or stepped on a vase.

Once he had backed away, the stalactite/stalagmites did not look so much like a column as a tree. The roof of the cave was deeply pitted, and gave the appearance of leaves. It was as if the ceiba, the sacred tree of the Maya, had been transported here into the underworld. Humberto knew that he had stumbled upon a very sacred place, one that had been kept secret for centuries. He did not have much time to think about it, because his flashlight was giving out. He retraced his steps, but had several moments of panic when he could not find the hole through which he had come.

“Stupid of me, when I was crawling through the hole I didn’t realize that I had been crawling UP.”

The opening he had been looking for was low, and hidden by an incline. His hand torch faded to a dull yellow, but Humberto eventually found the exit and crawled out before it extinguished for good.

He squirmed back through the hole and managed to find his way out. On the way he ran into the couple he had abandoned. “They looked at me and they said, ‘Where have you been?’” Humberto looked at himself in the light and saw his clothes were covered in clay.

So Humberto told them nothing, just returned them to the Mayaland hotel.

“The moment I left them…I went to Pisté (the closest town to Chichén Itzá). I got a rope, extra batteries, another flashlight, and I went back in.” He squeezed back through the hole and explored the rest of the cave. “I was able to find seven chambers, all of them with offerings,” he said. “All of them.”

He completely lost track of time, and when he finally emerged from the cave it was around 3 o’clock in the morning.

Sometime after sunrise, Humberto picked up his tourist charges at the Mayaland and returned to Mérida. He had another tour scheduled, this time to Uxmal. Before he left, he went to talk to his boss and cousin, Fernando Barbachano Gomez Rul, because he thought the cave was on Barbachano property. Humberto told him what he had seen, but Fernando at first was skeptical, knowing the cave had been explored many times before. Eventually, Fernando became convinced he was telling the truth, and instructed Humberto to take the guests to Uxmal, leave them there and then drive to Chichén Itzá where Fernando would meet him the next day. When Fernando arrived he was not alone. Accompanying him was Agustin Franco Avilar, governor of the state of Yucatán, Dr. Raul Cardenas, and Bill Andrews, who happened to be in Merida preparing to conduct an archaeological investigation of the ancient Maya city of Dzibulchaltun.

It had been more than a decade since Andrews had been to Balankanche. He was horrified to discover that ruins that had previously stood at the entrance to the cave were now all but gone. He learned later they had been ground into gravel a few years earlier by the road crew that had built the nearby state highway.

The party spent hours in the cave.

“After an entire night’s exploration, it was clear we had one of the most striking archaeological finds of recent time,” Andrews later wrote.

The governor, upon emerging from the cave, went to the Mayaland and telephoned the army post at Valladolid. That night a detachment of soldiers showed up to guard the cave. A few days later, archaeological work began.

Fortunately there was a team of experienced archaeologists in the area. Andrews’ team at Dzibulchaltun was in Merida, but they were not scheduled to begin work for five weeks.

“We applied for an emergency grant of $2,500 from the National Geographic and got it,” recalled George E. Stuart.

Stuart was part of Andrews' Dzibulchaltun team. Stuart later would work for National Geographic, but his biggest contribution may have been his son, David, who later became one of the key scholars who decyphered Mayan hieroglyphics. (Read George Stuart's obituary from the National Geographic linked at the end of this article.)

Andrews also requested the assistance of William J. "Willy" Folan, the same archaeologist who later would work on the diving excavations of 1961 and 1968 at the Cenote Sagrado, and who later would study and excavate Calakmul. Folan in 1959 was attending university in Mexico City when he got a telegram from Andrews asking him to join the Balankanché expedition. "I was about 28 years old," Folan recalls. "George (Stuart) was even younger than me."

Barbachano provided a generator and lights for the cave. He also put the archaeologists up at the Hacienda Chichen, which in 1959 could only be described as "rustic." Stuart shared a room with Folan and remembers how his friend was almost electrocuted in shower. "I touched the faucet and the drain at the same time," Folan recalls, and got a shock that nearly killed him.

Considering the window of time was brief, the team got right to business.

"The work was hard," Folan recalled later. "There's no goofing off."

Stuart mapped the cave, in the process discovering new passages and many more artifacts. In oppressive conditions -- high temperatures, high humidity, and little oxygen -- Stuart, Folan, Andrews and others carefully collected the artifacts and brought them to a staging area where they would be photographed and drawn. Stuart's wife, Gene, helped out by doing many of the drawings.

In those days Folan requently sported a stylish beret, even when in the cave. When asked why, Folan said he didn't remember, but added...

"I hit my head often enough. I never wanted to go in caves again."

INAH sent Roman Piña Chan, the director of Monumentos Prehispánicos in Mexico City, to oversee the Balankanché project. "Piña Chan was a unique invidividual," Folan said. He undoubtedly was the one who came up with the brilliant idea of not sending the artifacts to a museum, but instead making the cave the museum.

The Cave as Museum

The artifacts, instead of being shipped to the nation’s capital, would be left as they were, in situ, and the cave opened to the public once archaeology was done. It would be the world’s largest underground museum. For years to come, visitors would be able to discover the treasures of Balankanche again and again, just as Humberto had after crawling through the hole.

At least, that was the plan. But then the Maya showed up.

If you can't wait for Part III, here's a video Here's a video profile of don Humberto (in Spanish) that includes a visit to Balankanché, the cavern he discovered.

The above is expanded from The Man Who Owned a Wonder of the World: The Gringo History of Mexico's Chichén Itzá. (c) 2016 Evan J. Albright, republished by permission. Photograph of the illuminated censer in the main chamber of Balankanché by Bill Drennon. Other photographs are by the author, Drennon, Steven Fry, and from the monograph Balancanché: Throne of the Tiger Priest by E. Wyllys Andrews IV (New Orleans: Middle American Research Institute, Tulane University, 1970). 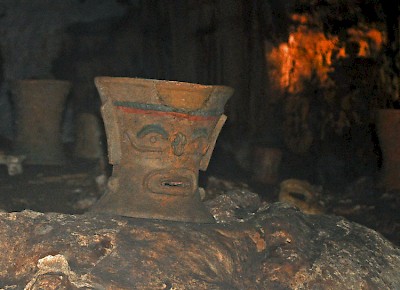 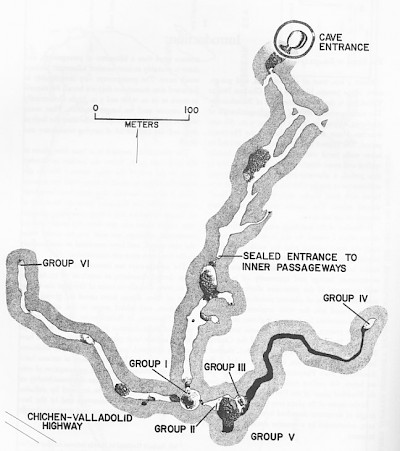 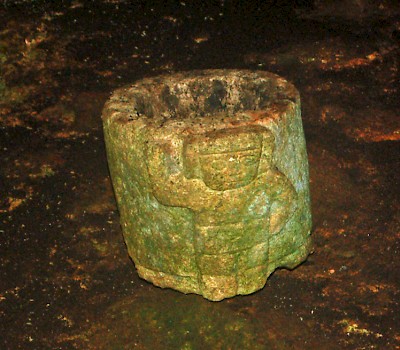 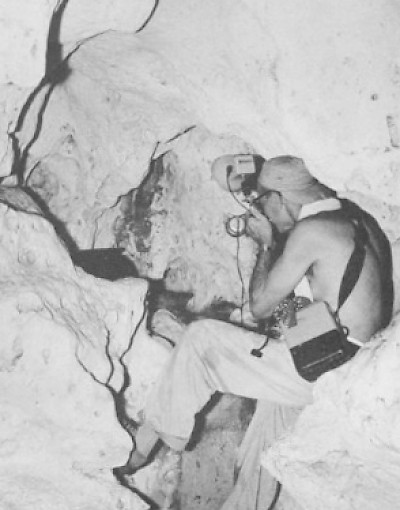 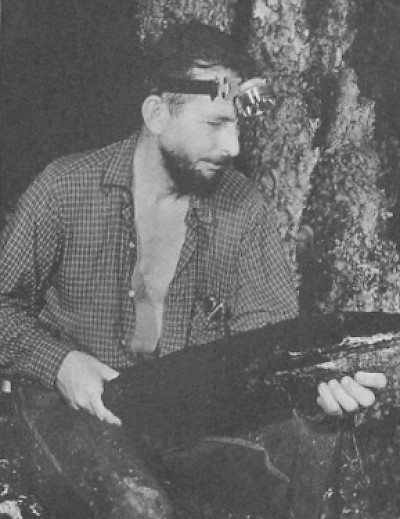 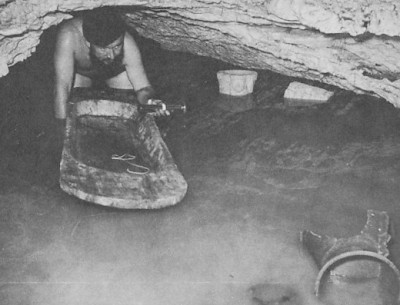 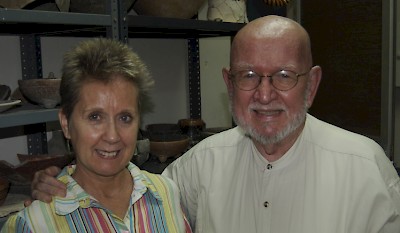