Editor's note: The following is an excerpt from The Man Who Owned a Wonder of the World written by Evan J. Albright. The book is an investigation into how Chichén Itzá became one of the most famous archaeological sites in the world. The author explained to us that during the editing process, many interesting, but in the end irrelevant, bits of history got cut or reduced. We asked Evan if he might share some of this interesting Yucatan history with our readers, and this is the result... Part One of a three part series. You might consider this the "director's cut" of the book, and this part features the true story of the discovery and excavation of the Balankanché cavern, less than two miles away from the center of Chichén.

Balankanché, the Throne of the Jaguar

Everybody complains that the guides at Chichén Itzá either know nothing or make stuff up. But a guide made the biggest discovery at Chichén Itza since Edward Herbert Thompson dredged the Cenote Sagrado and recovered gold, carved jade, and human skeletons.

José Humberto Gómez Rodríguez has lived his entire life in Mérida. “I’ve been in and out of the country, but Mérida is my home,” he says in a recent interview. He is thin and wiry and somewhat ageless. You would believe him if he told you he was in his 50s and you would believe him if he said he was 78. He has a winning smile and is completely comfortable with being the center of attention, good traits to have if you want to be a guide in Yucatan.

He got his start in the tourism business more than 50 years ago at Chichén Itzá. His grandmother was related to the Barbachanos, the family that owns the Mayaland Hotel and Hacienda Chichen, both next to Chichén, so she spent the busy season of June and July working there. From the age of eight, Humberto would stay with her and so he spent his summers growing up among the ruins of Chichén. Knowing how much he liked to explore, Bernardino Tun, the head gardener of the Mayaland, told Humberto of a cave not far away and gave him directions how to find it.

The entrance to the cave, though overgrown, was not difficult to find, only 300 meters off the road to the village of X’Kalakoop. At the mouth of the cave was a small group of ruins. In ancient times, steps had been chiseled into the rock descending into the earth. “Maybe because I was very young and very small, the cave looked very, very big to me,” he recalled.

At first he could only go a few meters into the cave before it became so inky black that there was no light to which his eyes could adjust. That Christmas he collected the little candles left over from the posadas. When he returned to the cave the next season he now had light so he could explore its labyrinthine passageways, leapfrogging one candle distance at a time. “I could look back, see the candle, light another one. I started going into the cave farther and farther and farther, little by little.” Later he obtained a flashlight, and was free to roam its passages for as long as the batteries would last.

Humberto was not the first to explore the cave. It was well known, at least to those who had spent time at Chichén Itzá. Edward Thompson had learned of it from the Maya who helped him dredge the Cenote Sagrado. On Easter morning 1905, he had explored it with the archaeologist Alfred Tozzer, who described it in a letter to his family in New England:

"The cave is immense and, as all others in this country, of limestone with stalactites and stalagmites over the entire roof and floor," Tozzer wrote. "It has been used for human habitation as there are stone steps leading down into it and stone walls for defense at intervals in the interior. The corridors are very winding and seemingly have no end, opening up into huge rooms with high dome-like roofs. We wandered around and had to use great care not to get lost in the numerous turns. We did not begin to cover the whole cave although we walked and walked. In many places the floor was covered with pots sherds bearing evidence of a former people. It was probably occupied in the time of tribal wars and possibly as a place of refuge at the time of the conquest."

When the Carnegie Institution arrived to restore Chichén Itzá in the mid 1920s, there began several investigations of the cave, which had a name: Balam Canche, Maya for “jaguar throne.” Researchers combed the floor for broken pottery and dug test pits. Others collected flora and fauna, or tested the groundwater that flooded the deepest parts of the cave. One was a teenager with a ten-dollar name: E. Wyllys Andrews IV. “Bill,” the son of one of Chicago’s leading surgeons, had grown up with the freedom and resources to pursue whatever intellectual interests caught his fancy. He was a regular visitor to the Field Museum in Chicago and through his parents, knew some of the up-and-coming Maya archaeologists of the day, most notably J. Eric S. Thompson. It was only natural that he discovered a passion for Maya archaeology and anthropology.

Andrews arrived at Chichén Itzá a few days after his 17th birthday in December 1933 to spend six months as Sylvanus Morley’s assistant at the Carnegie Institution’s headquarters and to collect reptiles for the Field Museum. While exploring Balam Canche (today called “Balankanche”), Andrews saw what he thought was a white snake. He spent hours in the cave trying to capture a specimen for his collection, but never saw it again (later explorations found a blind eel, which easily could have been mistaken for a snake). He also found more dangerous creatures, such as a large centipede the Maya called u-dzudz-milan (“the kiss of hell”) that, when cornered, would scuttle forward or backward with a biting attack that injected a clear poison reportedly fatal to humans. The cave became most famous, at least in scientific circles, when in 1936 it was discovered to be home to a species of hooded tickspider (cryptocellus pearsei), a thick-legged arachnid previously unknown to North America except as fossils.

The renown of these archaeological and biological discoveries was minimal by the 1940s when Humberto began to explore it. He wandered its passages, his footsteps at times crunched in the dark as he stepped on the broken pottery left behind by prehistoric generations. The floor throughout the cave alternated between sahcab, a calcareous light-colored earth, and a dark clay that, once brought into the sunlight, turned out to be red.

Around that same period archaeologists from the Carnegie Institution returned one last time to determine when the cave had been occupied. They dug a test pit and recovered pottery from many different eras. In the end they determined that the cave had seen human habitation over a period of 3,000 years, right up through the Spanish Conquest.

Humberto knew none of this. He went to school to study anthropology, but the prospect of spending several years in a classroom held no appeal and he dropped out. Instead he became a licensed tour guide, and went to work for the Barbachanos.

In those days guides were more than founts of history, archaeology, flora and fauna about Yucatan. Typically a guide would pick a group up at their hotel and spend the entire day with them, driving them to ruins or churches or villages, making certain they got lunch and sometimes dinner, and attending to their every need, all with the hope of getting a big tip at the end of their visit.

Because he worked for the Barbachanos, Humberto returned time and again to Chichén Itzá. In his spare time, while his guests enjoyed the comforts of the Mayaland, he would return to the cave.

In early September of 1959 Humberto had been guiding a couple from Ft. Lauderdale, Fla. “On the third day they said they were tired, that they didn’t want to do any more climbing [of ruins],” Humberto recalled. “I said, ‘Why don’t we do something different. Let’s go under the ground.’” So he took them to Balankanche. He gave them a flashlight and left them to explore while he went off on his own.

“I took one of the passageways that I was very familiar with, and I went right to the end,” he said. “I had been there I don’t know how many hundreds of times.” This time the wall looked a little funny, and in the glow of his flashlight it appeared to be of a different color. Humberto produced a large knife that he always carried and began scraping at the wall. “A section of it came off, like a big piece of stucco.” Behind it was the same kind of man-made masonry one could find in any of the Maya ruins. Humberto had found a secret wall.

If you can't wait for Part II to find out what's behind the secret wall, here's a video snipped of don Humberto describing what he found!

The above is expanded from The Man Who Owned a Wonder of the World: The Gringo History of Mexico's Chichén Itzá. (c) 2016 Evan J. Albright, republished by permission. Photograph of the illuminated censer in the main chamber of Balankanché by Bill Drennon. Other photographs are by the author, Drennon, Steven Fry, James Fields and from the monograph Balancanché: Throne of the Tiger Priest by E. Wyllys Andrews IV (New Orleans: Middle American Research Institute, Tulane University, 1970). 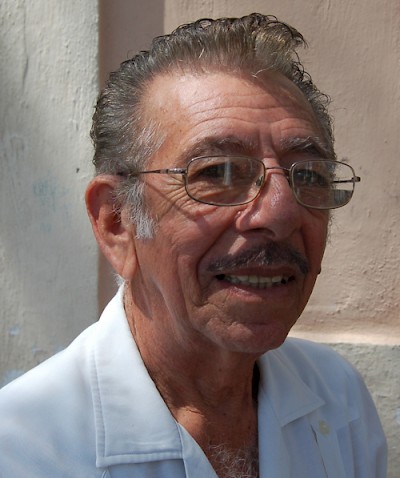 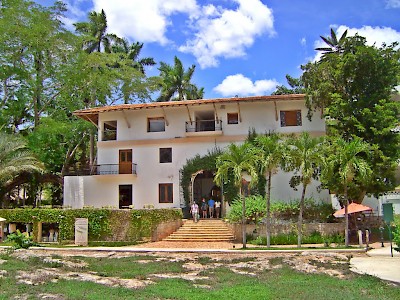 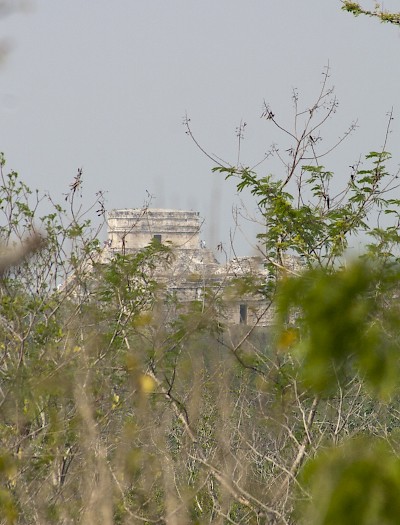 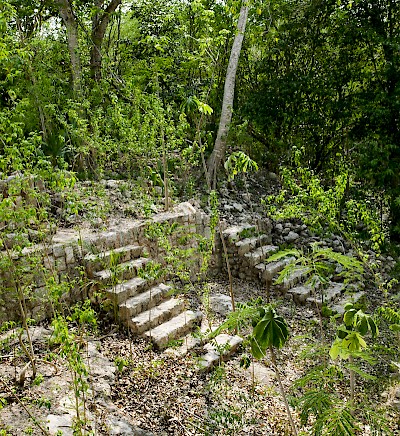 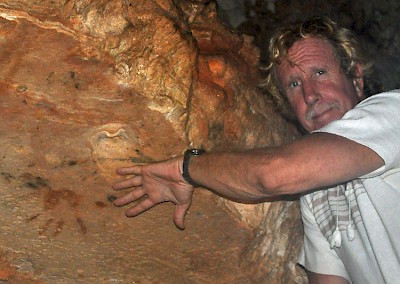