If everything goes according to plan, the outgoing Mayor of Merida, Cesar Bojorquez, will be opening Merida's new animal park, Animaya, on April 30 of 2010, which is Children's Day in Mexico.

So far, things seem to be going well.

At the beginning of April, we were invited along on a tour of the park, headed up by the Alcalde (mayor) himself. We met at the COPARMEX parking lot, piled into a few vans, and then headed out to the park. We were part of a small group of business people and government employees who were given an opportunity to see the park in the company of the Mayor, who wanted to explain what was there, and what his vision was for Animaya and Merida in the future. Perhaps he also wanted to convince some of the local businesspeople to get involved by setting up shop inside the park, as we learned later that Tere Cazola herself (pictured below), whose pastry stores are ubiquitous throughout Merida, was along for the ride and seemed to be very interested in what the Mayor had to say.

Animaya is located just outside the Periferico near the town of Caucel, itself a growing community with what seems like miles and miles of newly built housing developments, with more along the way. We drove out Jacinto Canek Boulevard, passed under the Periferico overpass, and then turned left into the Herradura housing development. Animaya was just on the other side of a large housing community. We learned later that this will NOT be the main entrance to Animaya, which will eventually have its own exit off the Periferico... a much better idea for what everyone hopes will be an attraction that is popular with both locals and tourists.

Animaya sits on the edge of a 27 hectare tract that has been assigned by the city for this project. Only six of those hectares are currently being developed, two of which are dedicated to space for the animals for now. That's about 1.5 more hectares than is in the Parque Centennial Zoo, by the way. Now is probably a good time to mention that of course, the park's full name is a bit longer: Animaya, Parque del Bicentenario. Merida's first zoo was built to commemorate 100 years of independence from Spain. Animaya is being built to commemorate 200 years of independence from Spain, and the one-hundredth year of the Mexican Revolution. Animaya is just one of the many events going on this year that carry the Bicentennial moniker, but the first one that we know of that will carry it permanently.

As we drove into the park, we noticed that it did not seem close to being finished. Two hundred and fifty workers crawled all over the park, along with trucks and cranes and other equipment. The entrance building was still under construction, someday to house a museum with exhibits about animals, local ecology and other earth sciences. Oh, and maybe a Tere Cazola store! We also, of course, noticed the tower. Probably the tower has an official name, but we didn't hear it. It is covered by a series of cast cement sculptures... one side features animals from around the world, and the other side features animals from the Yucatan Peninsula.

Towering Over the Yucatan

The 30-meter tall stele tower overlooks the entire park (and a good part of the Yucatan Peninsula, for that matter). You can climb up the tower (and we did!) or you can (eventually) take the elevator. The tower itself is a steel structure, covered with the sculptures that are fastened onto that structure, and surrounded at the base by a fountain.

At the top, a small observation deck provides one of the highest points in the land, we daresay. On a clear day, you can probably see Campeche. More to the point for us that day, the tower gives a great view of the main feature of the park, a central lake carved into the bottom of what was once a gravel pit. It had taken a long time and a lot of money to excavate, but today, the lake was full and being cleaned, in preparation for the arrival of the animals. Holes were being dug around the lake, and trees were being planted as we looked down.

Plan for the Future

Eventually, according to the Mayor, there will be a "ride" that drives down into the pit and through the animal habitat, where many of the animals will be roaming free. Of course, visitors all along the edge will be able to look down and see the animals walking around, and someday, the Mayor hopes that plans for a restaurant at one end with a see-through floor will also be realized. The restaurant would be accessed from outside the park, allowing Merida's citizens to enjoy dinner and a view of the animals at night, even when the zoo is closed. Like the Centennial Zoo in town, the park will also have a railroad that circles the park.

The first phase of the park, costing about $40 million pesos according to an article in El Financiero, includes the entrance buildings, the sunken animal habitat and the sculptured stele tower. All of these are planned for completion this month. There is also about an acre, outside the boundaries of the park itself and adjacent to the parking lot, that is set aside for use by the local Scout groups for camping, meetings and doing other Scout activities. Later phases include a Feline House for the big cats, including lions, tigers and pumas, a Nocturnal area that will be cavelike and feature night-loving animals, an aviary and a herpetario, a house for snakes and other reptiles. Also in the plans is a bridge that spans the lake at the base of the stele, making it easier to walk to the other parts of the zoo. The total budget for the park is estimated to be about $350 million pesos.

The mayor enthusiastically talked about the plans for the park, hopping out of the van at various places to show us where the plans would be realized. While we were in the van, he passed around artist renderings of the parts of the park he was discussing, and we were not surprised to see that many of the buildings will be built to resemble Mayan archaeological sites. At one point, we stopped so the excited workmen could show us a little green snake they had just found, assuring us that they would care for it after we left. Zoo employees were visible everywhere, including the head veteranarian, Carlos E. Monsreal Rodriguez, which gave the animal-lovers in us great hope. We heard that not all the current zoo animals will be moved to Animaya, and the Centennial Zoo will not be closed down, but will be made more accommodating for the animals that are not moved to Animaya.

So, who is moving to the first phase of the new Animaya Animal Park? Well, the giraffes for sure, as their distinctive house was being finished the day we were there (pictured below to the right). Also, according to the head vet, ostriches, llamas, tapirs, capybaras, the mountain goats, flamingos, peccaries and monkeys. In fact, there are three islands in the middle of the lake, one each for three different types of monkeys. These animals will all mingle, graze and live together in the sunken area of the new park, with access to the lake. What, no hippos, we asked? No, they make such a mess that even this lake could not contain them without a tremendous amount of work and maintenance. Zebras? No, they can't be trusted with the other animals (they are reactionaries, you know...).

Probably as we pen this article, the animals in question are quietly and carefully being transported from the old zoo to the new. Perhaps as we sleep, the peccaries are packing, the giraffes are craning their necks out of their transport trucks and the mountain goats are exploring their new rockpiles. In fact, on Sunday it was reported that a new buffalo and a few anteaters who had been brought here from Puebla have already been moved to the new zoo. There is still a lot to be done, but the workers are working tirelessly, from what we can tell, and the Mayor is determined to deliver the zoo to the public before he leaves office at the end of June. For now, at the beginning, we understand that admission to Animaya will be free, although we doubt that will always be true.

There has been a lot of controversy about Animaya over the last few years, and we hope, for the animal's sake and for the sake of Merida, that the controversy will not stop Animaya's progress. With the momentum that has been gathered so far, it seems to us that the rest of the park could be finished, thereby creating a world-class animal attraction, giving tourists another reason to visit Merida and future residents another reason to consider Merida as a great place to live. There is no question that this environment, while still more limited than their natural habitats, is a preferable place for any animal to the cages of the zoo downtown. And there is no question that the children of Merida need to be and will be educated about the importance of animals and encouraged to care for them and the planet by being exposed to their magic and magnificence up close.

Mayor Cesar Bojorquez has only a few more months in office, before either Beatriz or Angelica takes his place. While we have no favorites here, we do hope that whoever sits at the Mayor's desk after the election in June will continue to fulfill the dream of Animaya as a full-featured animal park that becomes a major attraction in Merida and the Yucatan Peninsula, while giving back to the communities and keeping the animals in question safe, healthy and happy.

A blog about Caucel, Yucatan (in Spanish)

Directions (for now) to Animaya:

Go west on Jacinto Canek Boulevard (Calle 57 west of Avenida Itzaes). Go past the Periferico towards Caucel. At the housing development, La Herradura, turn left to Calle 39A. Turn left on Calle 39A and then right on Calle 60 (there is a STOP sign there). You'll see a sign to the Parque Bicentennario. Animaya is up a quarter of a mile on your left. 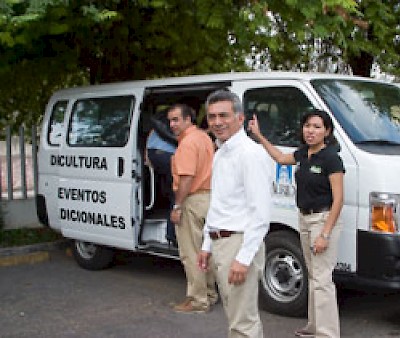 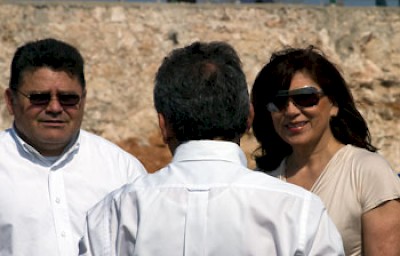 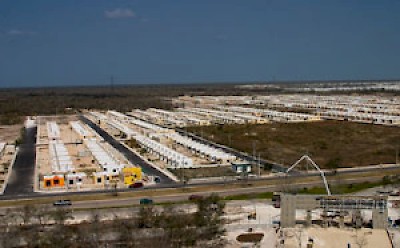 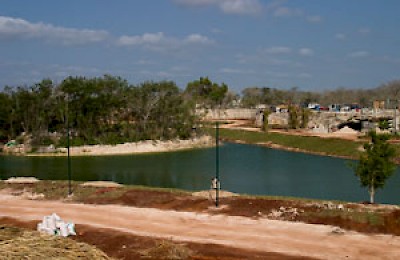 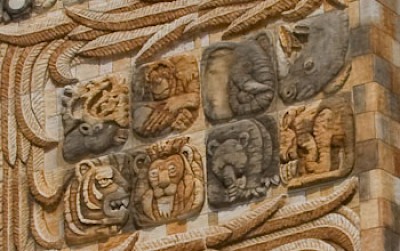 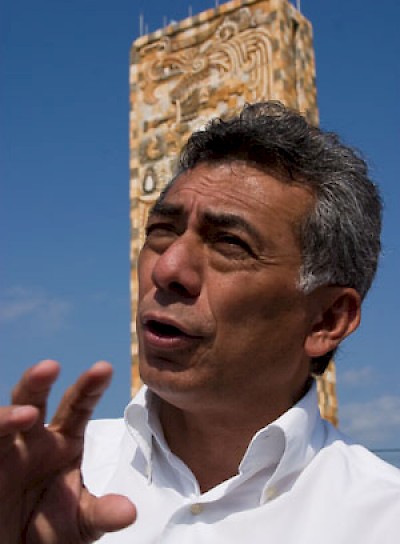 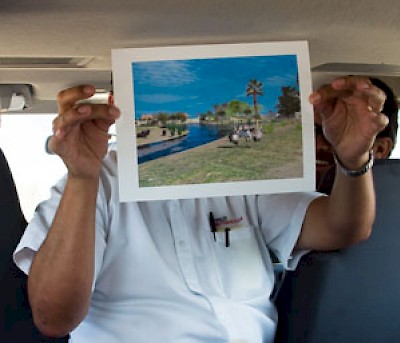 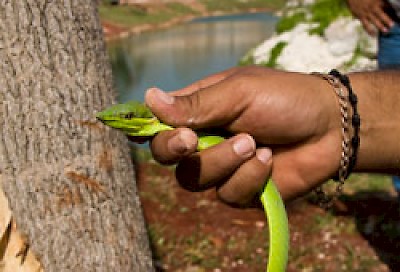 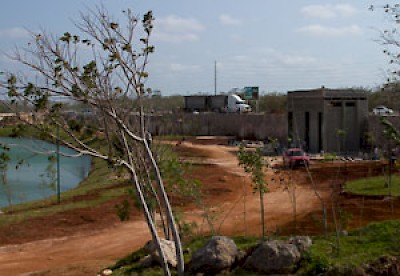 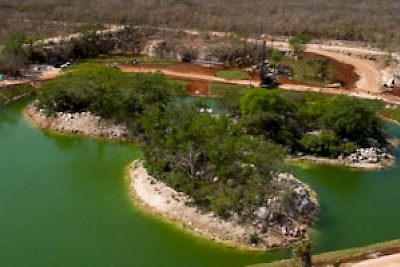